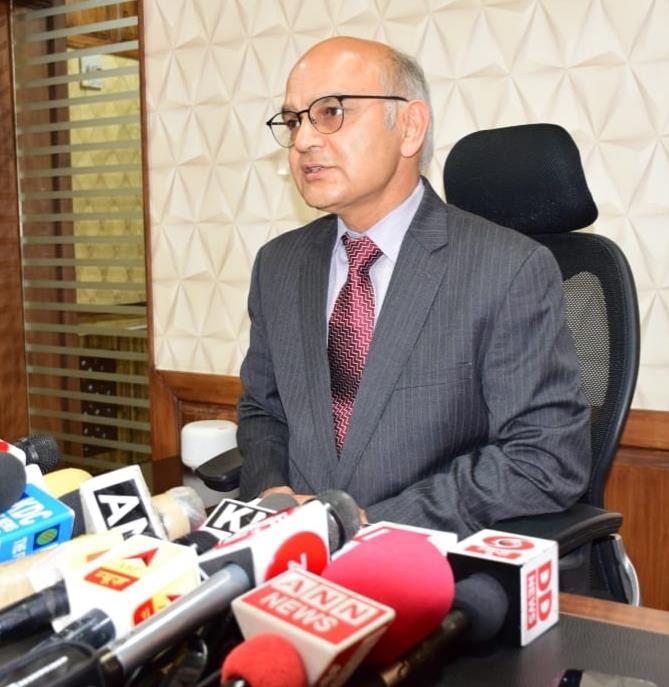 Srinagar: State Election Commissioner, K.K Sharma, today briefed the media about the arrangements being put in place to conduct the District Development Council and Panchayat by-polls in smooth and peaceful manner.

The SEC was interacting with Media here today.

The SEC is on tour to the Kashmir division to oversee the Elections.

Regarding Sarpanchs by-polls, KK Sharma said that the sarpanch elections will be conducted in 83 constituencies and total 223 candidates are contesting including 151 male and 72 female candidates in phase II. Similarly, in Panchs by-polls, going to be held in 331 constituencies, total 709 candidates are in fray including 552 males and 157 females for 331 vacant seats of panchs. He also informed that 58 sarpanchs (29 males, 29 females) and 804 panchs (548 males, 256 females) have been elected unopposed.

The SEC said that all the arrangements regarding elections have been completed besides man power, election material and security arrangements have also been put in place.

Regarding SOPs related to COVID 19 pandemic, the SEC urged upon the people to strictly follow the prescribed guidelines especially wearing face masks and maintaining social distance during polling process. He also said that sanitizers, thermal scanner and face masks shall also be provided to the voters, in case they forget to carry their own face masks/ sanitizers.

The SEC appealed the people to come forward to participate in the biggest festival of democracy.

The SEC said that special polling booths have also been created for Kashmiri Migrants at Jammu and Udhampur so that they can also participate in the election process.

It is pertinent to mention that DDC Elections and Panchayat By-Polls 2020 are being held in 8 phases from 28th November to 19th December. The counting of votes shall be conducted on 22nd of December.

Earlier, the SEC had a detailed review meeting with the Divisional Commissioner and IGP Kashmir in which he was briefed about the arrangements in place for the second phase of the DDC and Panchayat elections.

He was also briefed about the arrangements being put in place for maintaining the COVID 19 Protocols and SOPs by the Nodal officer of the Health Department.