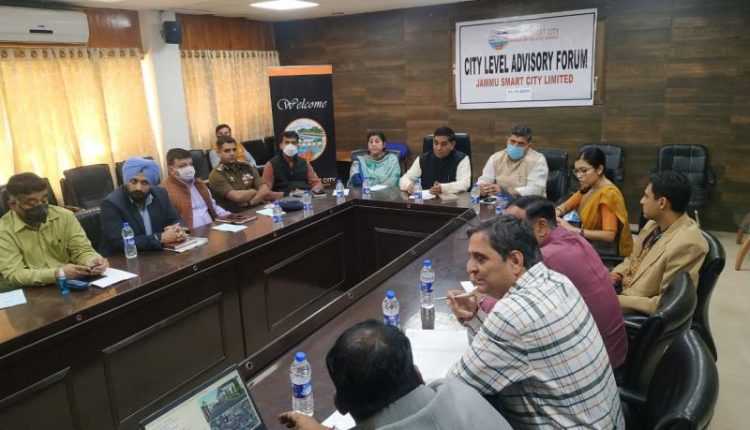 Giving a detailed presentation on the works taken up and completed so far, Chief Executive Officer, JSCL, Avny Lavasa said that the focus of Jammu Smart City Limited (JSCL) is to improve the quality of life of people by enabling local development and harnessing technology to create smart outcomes for citizens.

It was informed in the meeting that the main components of the Jammu Smart City Project are City Beautification, Solid Waste Management, IT Enabled Infrastructure, Road & Parking Improvement, Disaster & Emergency Management and Civic infrastructure Development.

It was also informed in the meeting that the 39 projects worth Rs 671.63 crore have been completed and 45 more projects costing Rs 1294.64 crore are at different stages of execution.

The projects including Vertical Garden, Façade Lighting Illumination of Bahu Fort, Fountains at Rotaries, Multilevel Parking at Bus Stand and Phase-1 of Wayfinding Signage have been completed in a stipulated time frame and work on other important projects is in full swing.

“The work on Jammu Smart City’s flagship project – the Development of Tawi River Front on the lines of Sabarmati River development front is going on war footing. The DPR of the project is under vetting with IIT-Jammu and the tender shall be floated in next week only,” the meeting was informed by the CEO JSCL.

The Advisory Forum members also gave their valuable suggestions for the overall development of Jammu city.

Lauding the officials for timely completion of several projects, JMC, Mayor, Chander Mohan Gupta said these projects will add charm to the beauty of the city of temples.

“These projects will increase the tourist footfall in Jammu as well as improve the overall look of the city,” he added.

He added that the completion of projects will also boost tourism as well as the economy of Jammu.

Speaking on the occasion, MP Jugal Kishore said that the Smart Cities Mission is an innovative initiative by the union government and the timely execution of projects will bring Jammu at par with other metro cities.

He also asked the concerned officers to set a timeline for each under execution work and put in extra efforts to complete these in a time-bound manner.