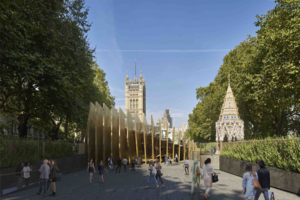 Giving universal free access to the memorial puts the UK on the same footing as the most important monuments and museums and will reassure Holocaust survivors their testimony will be freely available to all when they are no longer able to tell the story themselves, forever.

The Memorial, which is planned to be built next to Parliament in Victoria Tower Gardens, will be the focal point for national remembrance of the six million Jewish men, women and children murdered in the Holocaust and all other victims of Nazi persecution.

The learning centre will be a world-class facility, giving visitors powerful and engaging experiences to learn about the Holocaust and subsequent genocides through a variety of mediums including historic photographs, film footage and audio recordings.

Government support will supplement funds raised from visitor donations and other charitable contributions to cover the running costs of the Memorial and Learning Centre which, subject to planning permission, is expected to open in 2024. The government has already announced that it will contribute up to £75 million towards construction costs, to be supplemented by £25 million from charitable donations.

The Communities Secretary also announced a further £25,000 funding to support the work the Wiener Library does in using its archive to bring closure to families who lost loved ones during the Holocaust.

Free entry, in perpetuity, to the proposed UK Holocaust Memorial and Learning Centre will mean that there are no barriers to people commemorating and learning about the evils of the Holocaust and is in keeping with our national tradition of free entry to monuments and museums of great national significance.

As first-hand testimony from survivors becomes rarer and rarer, it is incumbent on all of us to be their witnesses. The Memorial will serve as a continual reminder to us all of why we need to make a stand against antisemitism, racism and hatred, whenever and wherever we find it – something that this government will always do.

This is the clearest demonstration of the Government’s commitment to addressing Holocaust Remembrance. Free access will widen the visitor base and enable the centre to extend its message and work to a greater range of people. The centre will work closely with other institutions, both national and international, to tackle Holocaust denial and Antisemitism.

We welcome the news that entry to the proposed Holocaust Memorial and Learning Centre will be free to all visitors. We thank the government and the Secretary of State for this important announcement.

UK and international visitors will now have the opportunity to discover the truth about the Shoah, genocide and the dangerous places to which racism leads.

We hope this will increase understanding; help stop the lies and falsehoods surrounding this terrible period; and enable us all to confront prejudice wherever it is found.

The Holocaust Memorial and Learning Centre will do immeasurable good for Holocaust education and remembrance in this country and I am delighted that it has been confirmed that this important resource will be accessible to all. We must ensure that the horrors of the Holocaust are never forgotten, and that its lessons are learnt for generations to come.

The Holocaust Memorial and Learning Centre will ensure that the memory of those who perished in the Holocaust are never forgotten and that the testimonies of those who survived are protected and remembered. These are fundamental to conveying the lessons of tolerance and understanding.

FedNor invests over $950,000 to grow and diversify the agri-food sector in Algoma region

The Government of Canada invests in energy efficiency improvements to Salishan Place by The River arts, culture, and heritage centre in Langley

Prince Edward Island will benefit from federal investments to support the...

FedNor invests over $950,000 to grow and diversify the agri-food sector...

Celebrating the one-year anniversary of the signing of the Canada-Quebec Asymmetrical...