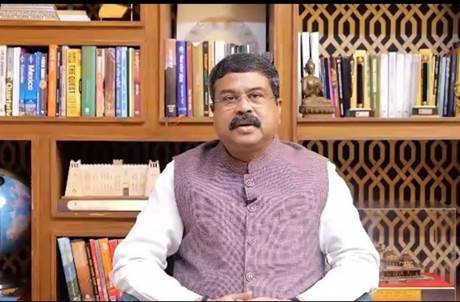 New Delhi: The Inauguration ceremony of the academic building for Department of Materials Science & Metallurgical Engineering on the campus of Indian Institute of Technology Hyderabad (IITH), which has been constructed with the support from Japan’s ODA loan through Japan International Cooperation Agency (JICA), was held online. This is the first academic building in IITH campus constructed under Japan’s ODA loan. The ceremony was attended by the Hon’ble Minister for Education, Government of India, Shri Dharmendra Pradhan through a recorded video message, Mr. MIYAMOTO Shingo, Minister (Economic and Development) from Embassy of Japan, and Mr. AKAMINE Kengo, Senior Representative of the JICA India office, among other dignitaries and guests.

JICA’s cooperation with IITH is one of the most successful examples of its holistic programmatic approach. The cooperation was based on the commitment between the Prime Ministers of the two countries in 2007. Since then, JICA has been cooperating with IITH by providing comprehensive assistance in research and development, human resource development and improvements in infrastructure through various projects including ODA loan, technical cooperation projects, joint research projects and public-private partnership projects.

The ODA loans for the project named “Campus Development Project of Indian Institute of Technology, Hyderabad” phase 1 and 2, were concluded between JICA and Government of India on January 28, 2014, with total loan amount of JPY 23,035 million (approximately INR 1,536 crore). The project aims to help in upgrading IITH’s education and research environment by constructing campus buildings and providing high-end research equipment. The construction includes 19 types of buildings, out of which six buildings were designed by the Japanese design team through JICA’s technical cooperation project to symbolise the partnership between India and Japan.

Speaking on the occasion, Mr. AKAMINE Kengo, Senior Representative, JICA India said, “JICA extends its congratulations to IITH on the momentous occasion of inauguration of the first academic building under JICA’s ODA loan projects. The relationship between IITH and JICA has been special. The holistic programme for collaboration with IITH is aimed at building a long-lasting partnership between India and Japan through integrated assistance, which combines several modalities of ODA scheme, and we believe it has been very successful. The collaborations between IITH and Japan has increased in many aspects, spreading out to the private sector and the academic field. Starting from this building, we are expecting more such facilities to be inaugurated in the coming months. These buildings include the symbolic facilities designed by the Japanese design team. I hope they will create good synergy with other Japan-India collaborative activities”

Under the holistic programme for collaboration with IITH, a Record of Discussions for a new technical cooperation project was signed between the Government of India and JICA last month[1]. JICA is expecting that the inauguration of the campus buildings will have a positive impact on other collaborations between IITH and Japan, including other JICA’s projects.