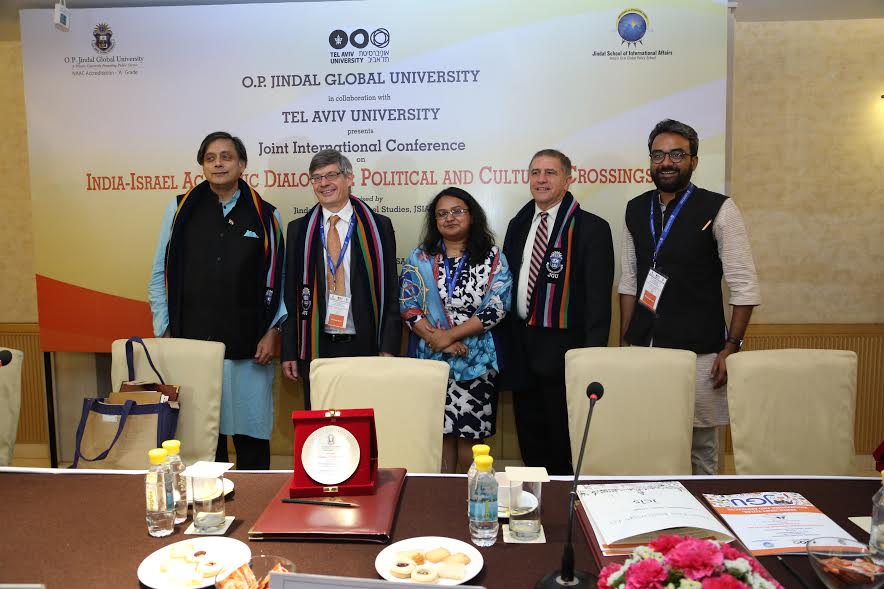 · Policies to strengthen the relationship between India and Israel will be shaped by the initiatives taken by academic institutions says Dr Shahi Tharoor
· Politicians may want to build walls, universities need to be build bridges and strengthen collaborations emphasize academics at the conference

This two-day engagement is an initiative by the Jindal Centre for Israel Studies (JCIS) to understand the opportunities and challenges facing the two countries keeping in mind their political and cultural specificities. An ideational exchange between professors and students from the two universities, the conference aimed to understand the complex nature of both societies and explore possibilities of future collaborations in different fields.

Ambassador Daniel Carmon, Ambassador of Israel to India, in his inaugural speech said, “India and Israel need to know more about each other in terms of heritage, culture, values, and interests. I believe that what is being done today through this conference organized by the Jindal Centre for Israel Studies is working towards this goal. We have already come a long way, but much needs to be done to overcome the challenges ahead of us. Knowing one another will help in sustaining this relationship as we celebrate 25 years of this partnership. Security, food security, education, innovation, and water are some of the concerns that need to be addressed. Endeavours by academic institutes like the Jindal Centre for Israel Studies will certainly go a long way in deepening and widening this relationship. Young minds, guided by experienced minds, will strengthen academic excellence and build greater awareness of our commonalities and the lessons we can learn from one another.”

University of Amsterdam: In uncertain situations, our…

Speaking at the inaugural session, Professor Raanan Rein, Elias Sourasky Professor of Latin American and Spanish History; Centre Head, S Daniel Abraham Center for International and Regional Studies and Vice-President, Tel Aviv University said, “India and Israel share similarities in values and challenges. Both have to deal with the fact that they are multi-ethnic, multi-cultural, and multi-religious and make this a strong basis for collaboration in academics.”

He emphasized that forums like this need to involve decision makers and prominent industry players to strengthen ties with universities in both countries. He went to say, “Politicians may want to build walls, but universities aim at building bridges. These collaborative ties of Jindal Global University and Tel Aviv University is crucial for the overall development of the countries and success of the education system. Traditionally most of our research ties have been with universities from North America and Europe, but in the last 10 years, we have taken a strategic decision to make India our top priority. In the last 5 years, the presence of Indian students in our universities has grown exponentially.”

The cross cultural dialogue between Indian and Israeli academics aimed at providing a better understanding of the complex nature of the two societies and explored common interests for future collaborations. In the Indian academic context, the Jindal Centre for Israel Studies at JSIA has been pioneering the field of Israel Studies its inception in 2012 and this conference is one of the many initiatives towards that objective.

It was on March 30, twenty-five years ago that India and Israel first established diplomatic ties. The Jindal Centre for Israel Studies at the Jindal School of International Affairs University chose this landmark day to host this conference.

Jindal Centre for Israel Studies at the Jindal School of International Affairs is the first of its kind dedicated to the field of Israel studies within the Indian academia and is committed to advancing India-Israel bilateral engagement.

University of Amsterdam: Communication & Media Studies number one worldwide in…

University of Amsterdam: Temperature in UvA buildings to be gradually lowered

University of Warwick: Here is the news – Coventry residents invited to…

iednewsdesk Apr 7, 2022
Coventry residents will be able to travel back in time thanks to an exclusive compilation of archive TV news and…