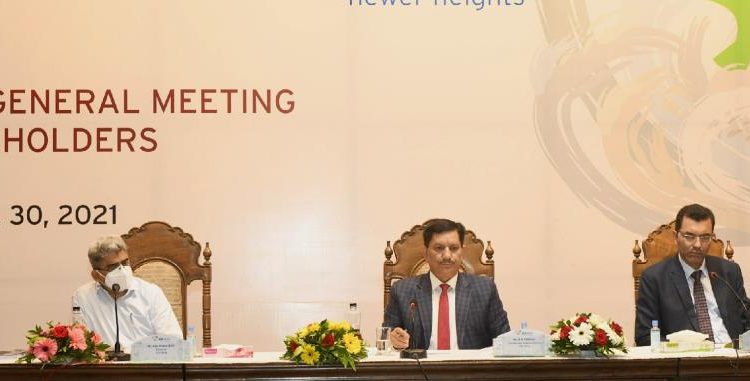 Capping Bank’s performance at the AGM for FY 20-21 themed – Braving Headwinds: Achieving Newer Heights – the CMD asserted, “Going by the numbers, your Bank has performed quite well and delivered profits for all the quarters of FY2020-21 despite tough market conditions. This performance will generate a long-term organizational momentum for the steady growth of business while cementing our collective resolve to march ahead towards accomplishment of government’s vision of self-reliant, entrepreneur-friendly and socially-inclusive economy”, adding, “In the recent UTLBC meeting, the UT Government has lauded the role played by your Bank during the flagship ‘Back to Village (B2V3)’ Program. Under B2V3, your Bank has a major share in credit dispensation with 19,402 cases received for ‘Finance of small businesses’ from young entrepreneurs, out of which 15,477 amounting to Rs. 249.57 Crore have been sanctioned”, he added.

On the Bank’s way forward, the CMD said that the Bank remained committed to encourage and implement the initiatives taken by the Government of India (GoI) for empowerment and upliftment of different segments of society through its flagship programs under AtmaNirbhar Bharat Abhiyaan. “Your Bank will also work towards fulfilling the Government’s vision of a “less cash” society. While doing all this, your Bank is consolidating upon growth, enhancing human capacities through upskilling, improving its systems and procedures, upgrading its technological platforms to meet its growth objectives and envisaged institutional excellence. In short, today your Bank really stands stronger, shouldering more responsibilities while reaching out to more people and ready to meet new challenges”, he said.

Speaking about the strategic focus of the bank, the CMD remarked, “Pursuing the strategy of preferring provisioning to profits so as to strengthen the balance sheet while keeping other key ratios comfortably intact, we have laid a stronger and better foundation for our future growth. Your Bank has vastly improved its numbers in terms of key financial parameters like NIM, Gross NPA, Net NPA, PCR, CASA, and Capital Adequacy besides gradually improving bottom line. Better financial numbers are bound to reflect in improved market valuation for the Bank.”

Apprising the shareholders about Bank’s capital planning and position, the CMD said that the Bank proposes to raise Equity Share Capital up to Rs 1000 Cr besides Tier-2 Capital up to Rs 1000 Cr by way of Non-Convertible, Redeemable, Unsecured, BASEL III Compliant, bonds in the nature of debentures on a private placement basis. He also recalled that the promoter and major stakeholder, Government of J&K UT recently infused additional equity of Rs. 500 Cr in the Bank through preferential allotment.

“In addition to this, Your Bank recently launched Employee Stock Purchase Scheme (ESPS) which received an overwhelming response from all the employees resulting in over-subscription of the issue culminating in allotment of 5.17 crore equity shares worth Rs 150 Crores. With such a planned capital augmentation, the capital position of your Bank would be comfortable to enhance business growth besides meeting the regulatory requirements with adequate buffers for any evolving stressed situation”, the CMD added.

Besides thanking the customers, who he said, continue to repose faith in the bank, he also expressed gratitude to the Bank’s promoters i.e. the Governments of UT of J&K and Ladakh for lending their kind, unflinching support in toughest of the times. He also appreciated the Directors-on-Board for their support and guidance.

Earlier, the Company Secretary Mohammad Shafi informed the shareholders about the conduct and proceedings of the AGM. He also read out the Auditor’s Report, comments from Comptroller and Auditor General (C&AG) besides placing agenda items for approval of the shareholders at the AGM.

The meeting concluded with a question-answer session, wherein the CMD listened and responded to different queries to the satisfaction of participating shareholders.

Regarding recruitments from UT of Ladakh, the CMD replied that the modalities of undertaking a special recruitment drive for UT of Ladakh were being finalized and would be announced soon.

On the question of staff vaccinations, the CMD informed the participants that most of the staff was fully vaccinated as on date. He expressed gratitude to all the participants in the AGM for their active virtual participation.

Meanwhile, the results of e-voting along with the scrutinizer’s report shall be placed on the website of the Bank and communicated to stock exchanges within 48 hours of conclusion of the AGM.

Athar Balpuri accorded warm and affectionate farewell on his retirement

University of Southern California: ShakeOut gives Trojans a chance to…