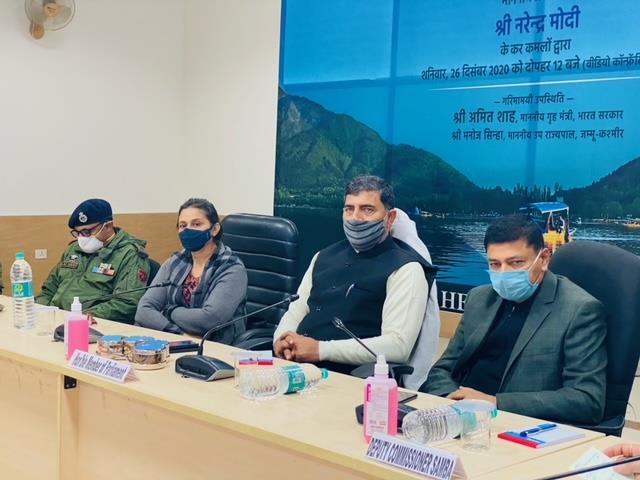 J&K has special place in the heart of PM: Jugal Kishore Sharma

Samba: Member Parliament, Jugal Kishore Sharma today said that Jammu and Kashmir has a special place in the heart of Prime Minister Narendra Modi when it comes to development and welfare of the people the Union Territory.

He was speaking at a function organized here to live stream the launch of the universal health coverage Ayushman Bharat Pradhan Mantri Jan Arogya Yojana (AB-PMJAY) SEHAT scheme for Jammu and Kashmir by the Prime Minister through virtual mode.

Addressing the audience, the Member of Parliament, Jugal Kishore Sharma said that J&K is top most priority of Government of India and the launch of universal medical health coverage exclusively for people of UT bears the testimony.

The MP asked the people to take the benefit of the scheme as it provides free of cost universal health coverage to all residents of J&K who are not covered by its former version AB-PMJAY.

Chief Medical Officer Samba, Dr. Rajinder Samyal highlighted the importance and significance of SEHAT scheme. He added that the government is collecting details of beneficiary families who may be missing from the SECC 2011 database. This will ensure that all beneficiaries are enrolled at the earliest so that they can avail free healthcare services. He further emphasized that National Health Authority’s (NHA) information technology platform like beneficiary identification system has been customized to implement the scheme.

At present four public hospitals i.e DH Samba, AH Ghagwal, EH Vijaypur and CHC Ramgarh are empanelled to implement the scheme in the district along with private hospitals. This scheme will include life consuming diseases such as cancer and kidney failure. This scheme would also cover treatment for oncology, cardiology and nephrology related illness from day one including high-end diagnostic procedures during hospitalization.

On the occasion, Golden cards were also distributed to the beneficiaries under AB: PMJAY Sehat scheme.

The function ended with vote of thanks by Dy. Chief Medical Officer, Samba, Dr. Sanjay Sharma.