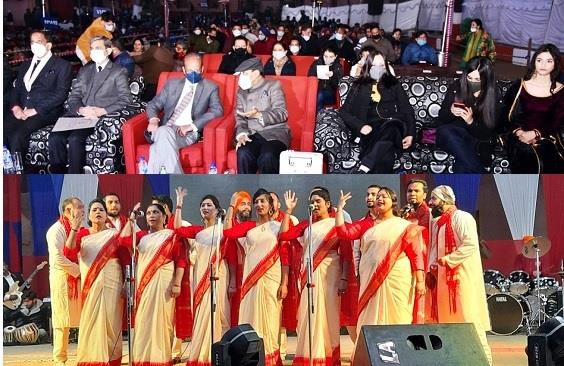 Jammu: A cultural programme was today presented by the inmates of District Jail Jammu.
Mr. Justice Rajesh Bindal, Chief Justice (A), High Court of J&K was the Chief Guest on the occasion.
The programme was witnessed by V.K. Singh, Director General of Police Prisons; Rajeev Gupta, Principal Secretary to Chief Justice(A); M. K. Sharma, Member Secretary SLSA; Sanjeev Gupta, Principal District & Sessions Judge; Dr. M. S. Lone, DIG Prisons, besides senior officers and staff of Prisons Department.
Various cultural items like patriotic songs, popular dance numbers and folk songs were presented by the inmates.
Superintendent, District Jail Jammu Mirza Saleem Ahmad Beigin his welcome address underlined various steps being taken in the prison for reformation of prisoners and improving prison administration. He highlighted that the Department is working towards making jails self-reliant and providing better living conditions and training facilities to the inmates.
The Chief Justice (A), in his address, appreciated the efforts made by jail authorities for welfare of prisoners. He encouraged the inmates to make best use of their time in prisons by acquiring skills available in the jail. He lauded the inmates who performed during the function and complimented the trainers and staff of Prisons Department for their efforts.
Earlier, on his arrival, the Chief Justice was received by DGP, Prisons V. K. Singh & a guard of honour was presented to him.
The Chief Justice also visited the Interview Room, Video Conference Room, Display unit & Inmate Calling Room to inspect the facilities available for jail inmates.

An estimated 10.4 million children in the Democratic Republic of the Congo, northeast Nigeria, the Central Sahel, South Sudan and Yemen will suffer from acute malnutrition in 2021