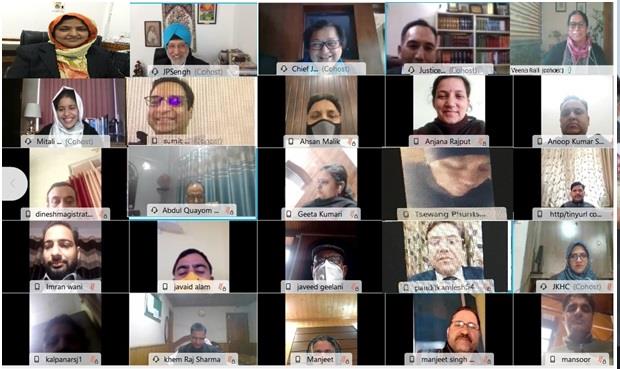 Speaking at the valedictory session, Patron-in-chief, the Chief Justice of High Court of J&K, Justice Gita Mittal, emphasized on the need for imparting mediation training to the judicial officers for making the judicial system more effective and useful adding that judicial work cannot be performed by mere intelligence and knowledge.

“In addition, it requires wisdom, intellect and compression of the full impact of orders and deeply ingrained sense of justice. Training not only gives exposure but also moulds the personality of the judge”, the Chief Justice said and added that training further updates the knowledge by absorbing and assimilating new techniques and provides opportunities for interactive sessions amongst the officers and the Resources persons so that all their doubts are put to rest.

Highlighting the importance of Mediation and Conciliation, the CJ said it is a prime tool for resolving the disputes in the alternate dispute resolution mechanism. The Chief Justice further said that the Alternative Dispute Resolution(ADR) mechanism is assuming significance worldwide and the adversarial system of justice delivery system is embracing it substantially.

“The ADR is one of the most vital and important gifts of legislature to the people of the country which needs far and wide publication, so that the people are benefited” the Chief Justice maintained further.

In his address, Chairman of the Mediation and Conciliation Committee, Justice Tashi Rabstan stated that the objective of training the judicial officers is primarily to evolve plans and develop strategies for improving the judicial system.

Inter actions and discussions helps to remove the defects and misconception about law, he added.

The members of the Mediation and Conciliation committee, Justice Sindhu Sharma, Justice Rajneesh Oswal and Justice Javed Iqbal Wani, had approved and devised the module of training for judicial officers of Jammu, Kashmir and Ladakh