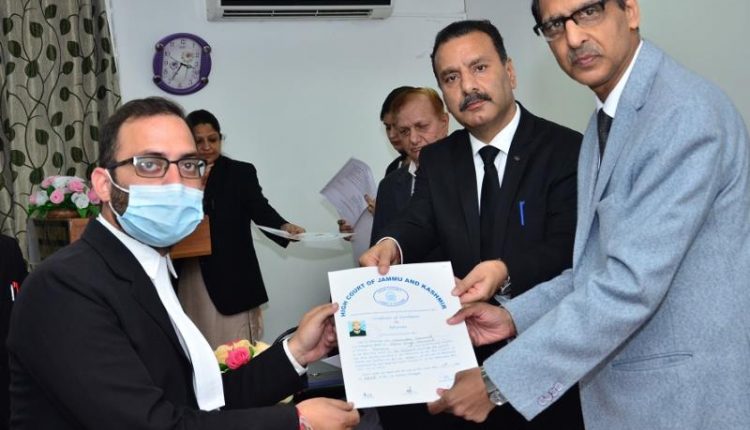 JAMMU  : To commemorate the spirit of Constitution on the occasion of Samvidhan Diwas, Jammu and Kashmir Judicial Academy under the supervision of Chief Justice, High Court of Jammu & Kashmir and Ladakh (Patron-in-Chief, J&K Judicial Academy), Pankaj Mithal, and guidance of Chairman, Justice Dhiraj Singh Thakur and Judges of Governing Committee of Jammu & Kashmir Judicial Academy, today organized ‘Oath Ceremony’ for newly enrolled advocates who have been conferred with absolute certificates to practice law.

On the occasion, newly enrolled advocates took oath to uphold the values of Constitution of India and follow the commandments enshrined in the Advocates Act and the rules of ethics, conduct and behaviour in letter and spirit.

Enrolment certificates were also distributed among the Advocates from various districts of Jammu province.

Justice Puneet Gupta advised the new entrants to be constantly upgraded in learning the skills saying that success in a profession demands practice, skill enhancement, research and gaining experience through interactive discourses with fellow Advocates, colleagues and judicial officers. He added that new entrants must be equipped with ethics of profession before entering the portals of justice.

On the occasion, Director Judicial Academy addressed the advocates and encouraged them to display highest qualities of professional excellence and ethics. He exhorted upon them to uphold the spirit of constitution and render their services to the society in a most meaningful manner.

Fortis Hospitals, Bangalore conducts “Guardians of Health” HR Conclave to reinvent the role of HR in the new normal