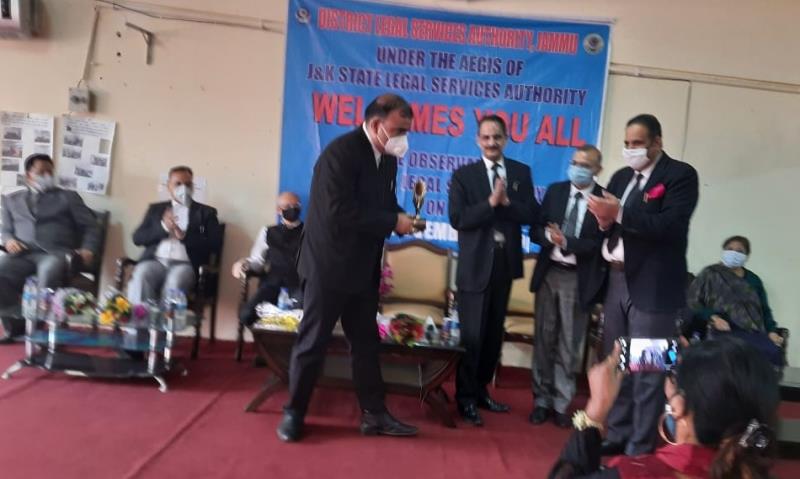 The aim of celebrating the day is to ensure free of charge, proficient Legal Services to weaker sections of the society as well as to make them conscious about their rights.

The participants þþþwere introduced to the objective and importance of Legal Services Day and deliberations were made about various provisions of the Legal Services Act.

M.K Sharma, Member Secretary J&K Legal Services Authority, while appreciating the efforts of para legal volunteers, also emphasized Alternative Dispute Resolution mechanism as a great contribution towards dispute resolution. He also highlighted the importance of Lok Adalat and encouraged the concept of equality as the basis of social justice.

DLSA Samba observed National Legal Services Day by organizing an Interactive Workshop at Ahata-e-Waqar, Old District Court Complex Building with all Para Legal Volunteers and Panel Lawyers on the topic “Changing Role of Legal Services – Adding new dimensions” with the objective of updating the grass root level workers regarding their additional responsibilities in the wake of current scenario.

On the occasion, disbursements were made in three cases amounting Rs 4,00,000/- under the J&K Victim Compensation Scheme by M.A. Chowdhary, Chairman DLSA Samba.

FMPHW Nasreen Bibi is happiest person after LG mentions her…

The Para Legal Volunteers also held awareness drives at District Administration Complex at Samba where they distributed pamphlets for generating awareness on the subjects of Free Legal Aid and other social security and welfare schemes.

DLSA, Kathua organized a webinar on role of Legal Services Authorities which was attended by staff, PLVs and nominated persons from Education Department. Meanwhile, Legal awareness programme were also organized by TLSCs of Bani, Billawar, Hiranagar, Basohli and Mahanpur.

DLSA, Baramulla organized different programmes across the district. An online awareness programme was organized with the participation of PLVs, Panel Lawyers, Anganwadi Workers wherein the participants were apprised of the free Legal Services and the objective of the Legal Services Institutions. Awareness programmes were also organized in schools at Sopore and Kunzer for generating the message of Free Legal Aid and various schemes.

DLSA Anantnag observed the day by organizing an online discussion on the topic “ Role of Legal Services Authorities in ensuring Justice to weaker sections of the society”. The participants were made aware by the Chairman DLSA about the objective and functions of Legal Services Authorities and their aim to ensure justice by providing free and competent legal services. The day was also celebrated by TLSCs of Bijbehara, Dooru and Aishmuqam.

DLSA Ramban celebrated the day across the district with special focus on “Problems related to Domestic Violence.” AMeet was conducted with the PLVs who were explained the aim, objective and history of the day and were urged to fight for the rights of the weaker sections of the society. The day was also observed by TLSCs Batote, Banihal, Gool and Ukhral.

DLSA Leh observed Legal Services Day by organizing an awareness program where the members of the Bar, PLVs and prominent members of the society participated.

Similar programmes were also organized by TLSC’s of Tral and Pampore.

At Kulgam, an awareness programme was organized by DLSA where the attendees were made aware about the importance of free legal aid and the objective of the Legal Services Institutions.

DLSA Kupwara celebrated the day by organizing an awareness programme at Court Complex which was attended by PLVs and members of the Bar highlighting the role of PLVs at Legal Aid Clinics in dispensing free legal aid. Door to door campaign was also organized where the members of the community were made aware about the free services offered by Legal Aid Institutions.

Similarly, the day was observed by DLSAs of other districts across UT of J&K with enthusiasm. All precautions and safety norms were taken into consideration in the wake of pandemic while conducting the activities.