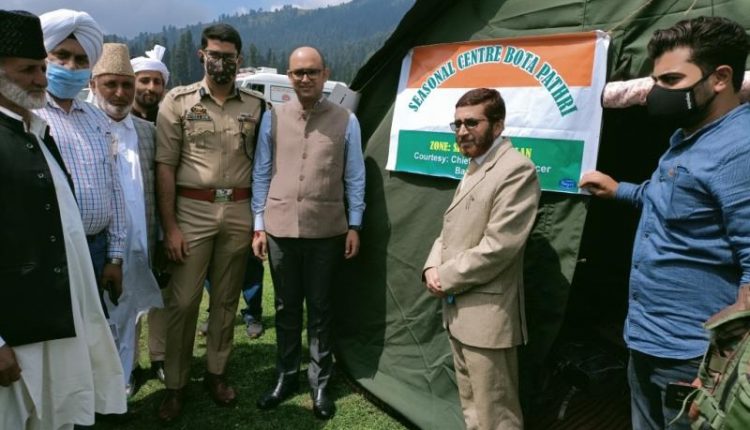 SRINAGAR : Public Health Engineers have an additional role of creating a sense of ownership among masses about the assets raised under Jal Jeevan Mission (JJM).

Bharat also noted that Public Health Engineers are not purely engineers but architects of positive change in the society. He urged them to speak in the language of passion to inculcate belongingness of purpose to this virtuous cause. He asked them to take pride in their job as it is giving them opportunity to contribute remarkably.

The MD, NJJM further urged them to implement all the projects in consultation with Gram Panchayats, Pani Samities and other local inhabitants. He asked them to actively involve them at every stage besides preparing them to take operation and maintenance of these public utilities.

The Additional Chief Secretary, Finance, Atal Dulloo implied that without water life is hard to imagine. He commended the department for making a substantial progress in the mission and asked them not to leave any stone unturned in meeting all the targets within the deadline. He maintained that this mission is highly significant and worth every effort that could be made in its fulfillment.

The Additional Chief Secretary, H&ME, Vivek Bhardawaj exhilarated upon the officers to understand that they are fortunate enough to put in their efforts in such a pious mission. He said that it is such a satisfying assignment to bring water to those who are struggling to fetch it.

He mentioned that its importance can well be gauged from those women and children who had to walk miles to get their hands to it. He said that it is so blessed an idea to envision it that was done by the Prime Minister himself.

The Commissioner Secretary, Jal Shakti Department, M Raju gave out that J & K has already achieved the target of bringing potable water to every school and Anganwadi centre. He said that the department is on the task of providing safe water to every health centre and gram panchayats.

He said that nationally the mission is scheduled to get completed in 2024 but J&K would meet the requirement of ‘har ghar nal se jal’on the auspicious day of 15th August, 2022. He said that with the active support of GoI, J&K has boarded on this ambitious project and is determined to complete it on the given deadline despite having difficult terrain.

On the occasion Director, NJJM, Pradeep Singh delved on the possibilities and means of achieving this mission. In his presentation he provided different facts and figures about the implementation of this mission nationally and in J&K also. He displayed a motivational video message of Prime Minister also.

The Mission Director, JJM, Dr Syed Abid Rasheed Shah maintained that the target of 15th August 2022 is worth chasing and there is no turning back on it. He said that J&K has already achieved certain mile stones of implementing this mission fully in districts like Srinagar and Ganderbal and going to cover more districts in near future.

While giving details of the mission implementation here he revealed that J&K has provided tap water to 10,30,054 households out of which 4,54,588 have been covered under JJM which is 24% of the total water connections. He further said that the remaining target of 8,05,136 households and other establishments would be covered in a time bound manner.

The day long conference was marked by technical presentations from other engineers and professionals from GoI and Jal Shakti Department, Kashmir. These highlighted the success stories achieved under the mission besides the possibilities of achieving the mission targets in a hassle-free manner.

Earlier the MD, NJJM replied to the questions of the field staff attending the conference. The main aim of the conference was to sensitize the engineers of the department about the significance of this mission. Its objective is also to address certain queries and concerns of the field staff in order to make this nation-wide mission a grand success.