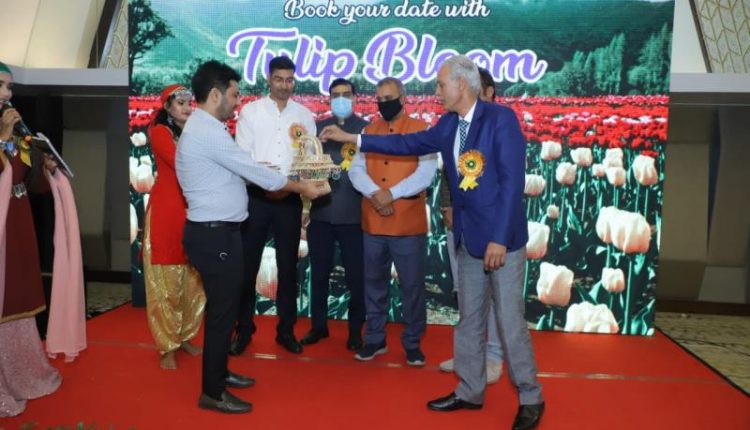 Jammu: The J&K Tourism Department in collaboration with the Association of Kashmir Tour Operators. held another road show at Indore as part of its promotional campaigns across the country to attract tourists.

Assistant Director, Dr. Javed-ur-Rahman and Tourist Officer, Jammu, Rajesh Raina represented the J&K Tourism who were accompanied by the office bearers from the Association of Kashmir Tour Operators (AKTO).

Leading tourism operators, travel agents, destination management companies besides regional and national media were invited at the promotional evening who networked with the J&K’s travel agents for business opportunities and promotion of the varied tourism products.

J&K Tourism highlighted the vast potential of the tourism sector in the Union Territory through beautiful presentations delivered by Assistant Director Dr. Javed ur Rehman.He highlighted the JK’s all tourism products including leisure, adventure, pilgrim, handicraft, food and culture.On the occasion, various short films were also screened which mesmerised the audience.

Assistant Director India Tourism, Ministry of Tourism, R. K Mishra who was also one of the guests at the promotional programme hailed the JK’s initiative in promoting its tourism sector in Madhya Pradesh which, he said, is one of the potential markets for the Union Territory.

Hemendra Singh Jadon, Chairman, Travel Agents Association of India, Madhya Pradesh & Chhatisgarh Chapter also spoke on the occasion and said JK is one of the priority destinations for travel agents and travellers are eager to visit the paradise. He assured that the TAAI – MP chapter will promote JK in their packages.

Praising the hospitality of the Kashmiris, Atul Singh Chapter Chairman (MP) Association of Domestic Tour Operators of India who also spoke on the occasion said they have been sending tour groups to Kashmir for a very long time and they have been receiving overwhelming love from the people during their holidays. He said Kashmir is not only a beautiful place but safe for travellers. He also urged the travel and tourism fraternity to promote JK vigorously in their tour packages.

Moreover, the department has already organised several shows at other major cities including, Kolkata, Pune, Puri, Jaipur, Amritsar, Bhubaneswar, Bhopal and Bangalore followed by Chennai on March 12, Raipur Varanasi & Lucknow on March 13, Nagpur on March 17, Mumbai & Hyderabad on March 19, Delhi on March 25, Cochin on March 26 and Mysore on March 27 beside it will also participate in major travel marts like OTM, SATEE as part of its aggressive marketing campaign.