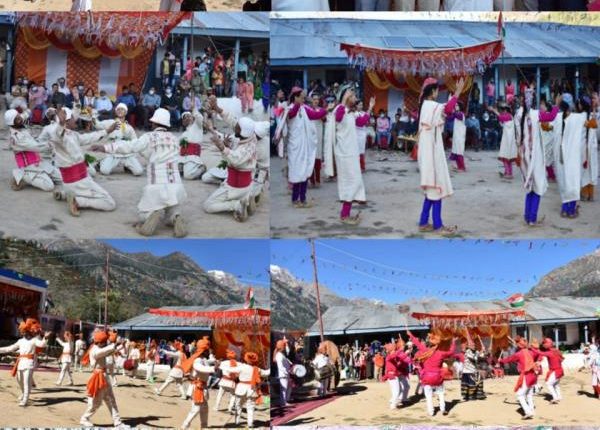 KISHTWAR : As a part of 75 weeklong celebration of Azadi Ka Amrut Mahotsav, Jammu and Kashmir Academy of Art, Culture and Languages in collaboration with District administration and Paddari Lok Kala Manch organised a mesmerizing Mega-cultural bonanza under the supervision of JKAACL Secretary, Rahul Pandey, here at Ligri Paddar.

During the event, besides local Artists, several provincial level artists hailing from Reasi, Jammu and Bhaderwah also displayed their talent through scintillating performances.

The khad zaath, Ghuri and Shangli forms of local traditional dance were the main attractions of the programme. Besides, skits based on enriched Paddari folk culture and solo singing performance of local folk singers intermingled with mystic tunes of the local instrument kept the participants captivated.

The Dhaku dance by the guest artists of Reasi and Bhaderwah also grabbed the praises of audiences.

On the sidelines, Horticulture and Agriculture department along with local farmers installed stalls exhibiting their local products.

Besides, an on spot testing and vaccination drive was also conducted by the Health department.

Speaking on the occasion, the prominent persons and the members of Paddri Lok Kala Manch thanked secretary JKAACL Rahul Pandey and Additional Secretary, Sanjiv Rana for organizing such a scintillating programme in this far flung area.

The programme continued till late evening. Gulab Saifi under whose management this event was organised thanked the sarpanch Ligri, Anju Devi and locals for their wholehearted cooperation in making this event a grand success and for the hospitality they offered to the artists and JKAACL team.