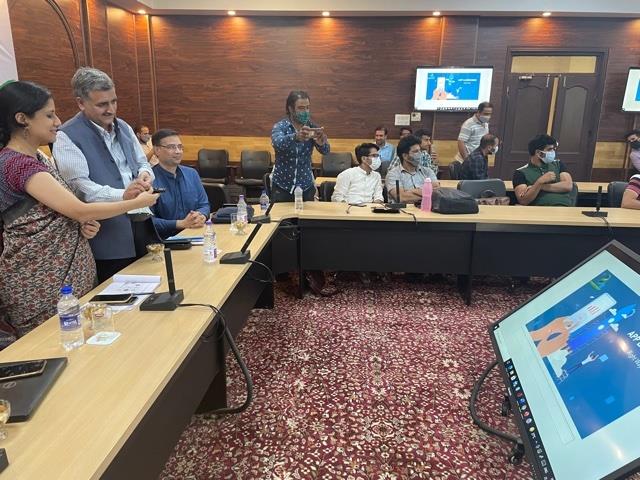 SRINAGAR : As a part of the nationwide celebration of ‘Azadi ka Amrit Mahotsav’ to commemorate 75 years of India’s Independence, Jammu and Kashmir Entrepreneurship Development Institute (JKEDI) and Startup India, Department for Promotion of Industry and Internal Trade (DPIIT) today organized a line of speaker sessions on the benefits under Startup India.

The ‘Azadi ka Amrit Mahotsav’ celebrations commemorate 75 years of India’s Independence. It embodies all that is progressive about India’s socio-cultural, political, and economic identity and is dedicated to the people of India who have been instrumental in bringing India thus far in its evolutionary journey, fueled by the spirit of Atmanirbhar Bharat.

The event had different sessions to inspire and equip entrepreneurs with immense knowledge to innovate and scale their existing venture to the next stage. Khusbhu Verma, a representative from Startup India gave detailed information about benefits under Startup India.

Managing Director, J&K Trade Promotion Organization, Ankita Kar talked about the challenges and way ahead for the startup ecosystem in the Union Territory of Jammu and Kashmir. “Such events can help us to know about latest happenings in the startup scenario of the country. This platform will push the startups to think about their projects, like how they can make a difference and can the model be scalable. Government can do a lot for startups starting from ideation stage by providing right kind of mentorship and bringing investors to the Union territory,” she added.

“Such interactions and suggestions will go a long way in helping the startup endeavors of the Union Territory,” said Director JKEDI. He added that in future the Institute will continue to facilitate the aspiring entrepreneurs of the UT.

The role of States and Union territories in promoting the startup ecosystem has been pivotal for India’s journey towards a leading global startup hub. In the conclusion, session on Startup India was conducted by the representatives from the Startup India Team who spoke about the government’s flagship initiative aimed at building a strong ecosystem for nurturing innovation and startups in the country. The covid-19 standard operating procedures were adhered to full during the event.