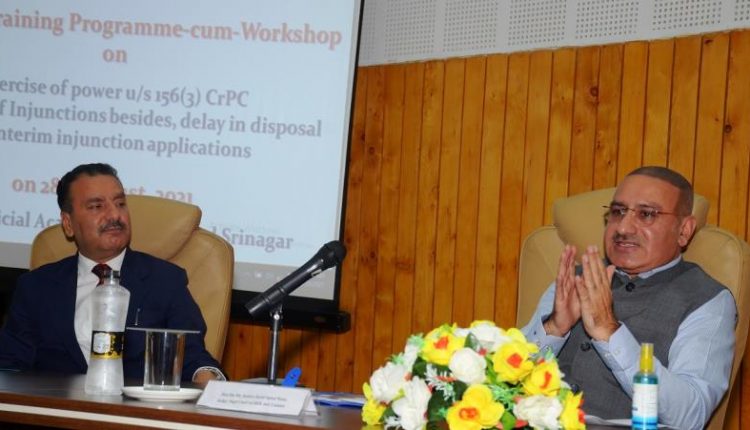 SRINAGAR : Under the visionary leadership of Justice, Pankaj Mithal, Chief Justice, High Court of J&K and Ladakh (Patron-in-Chief J&K Judicial Academy) and inspiring guidance of Justice Dhiraj Singh Thakur, Chairman and other Judges of Governing Committee, the J&K Judicial Academy (JKJA) today organized one day Training Programme-cum-Workshop on “Exercise of power u/s 156(3) CrPC and grant of Injunctions besides, delay in disposal of interim injunction applications” for Judicial Officers (Munsiffs/JMIC) of Kashmir Division with objective to apprise the officers of the latest case law on the subject and to augment their learning capacity for leading them to effectively exercise such discretionary jurisdiction by adopting judicious approach.

The Training Programme was presided over by Justice Javed Iqbal Wani, Judge, High Court of Jammu and Kashmir & Ladakh (Member, J&K Judicial Academy), who presented thought provoking and inspiring inaugural address. He apprised the participants with the statutory framework and enlightened them with valuable and enriching inputs on the given topics.

The programme was mostly in interactive sessions which was moderated by Sanjay Parihar, Director, J&K Judicial Academy. The participating Judicial Officers discussed the relevant provisions of the Code of Criminal Procedure and Code of Civil Procedure concerned with the subject under discussion. The issues cropped up during discussion were resolved in the backdrop of the relevant provisions of law and judicial precedents from the Superior Courts.

The programme concluded with the vote of thanks by the Director, J&K Judicial Academy.

Advisor Farooq Khan for sticking to timelines while executing the sports infrastructure projects; Reviews progress on various sports projects being executed by JKPCC