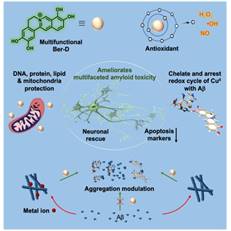 New Delhi: Scientists from Jawaharlal Nehru Centre For Advanced Scientific Research (JNCASR) an autonomous institute under the Department of Science & Technology (DST), Govt. of India have modified the structure of Berberine, a natural and cheap product similar to curcumin, available commercially, into Ber-D to use as a Alzheimer’s inhibitor. Their research work has been published in the scientific journal iSceince.

Alzheimer’s disease is the most prevalent neurodegenerative disorder and accounts for more than 70% of all dementia. The multifactorial nature of the disease attributed to multifaceted toxicity has made it difficult for researchers to develop effective medication.

Prof. T. Govindaraju, a Swarnajayanti fellow from JNCASR, led his team in the quest to discover natural product based therapeutic candidates for Alzheimer’s disease, and selected isoquinoline natural product berberine found in India and China and used in traditional medicine and other applications. However, berberine is poorly soluble and toxic to cells. So they modified berberine to Ber-D, which is a soluble (aqueous), antioxidant. They found it to be a multifunctional inhibitor of multifaceted amyloid toxicity of Alzheimer’s disease.

The structural attributes of Ber-D are such that they prevent the generation of reactive oxygen species (ROS) and rescue biomacromolecules from oxidative damage. Ber-D inhibits aggregations of metal-dependent and -independent Amyloid beta (Aβ) (which are the peptides of amino acids crucially involved in Alzheimer’s disease as the main component of the amyloid plaques found in the brains of people with Alzheimer’s disease).