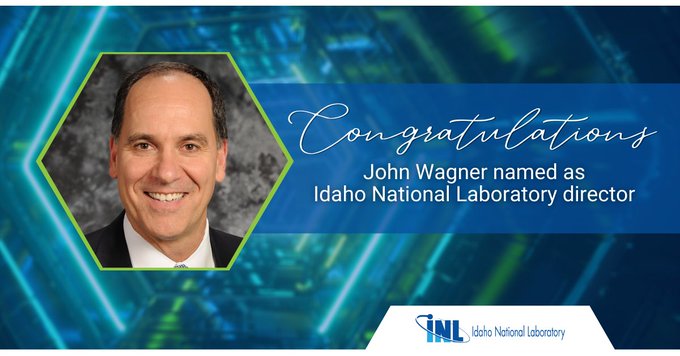 Idaho: Battelle Energy Alliance’s (BEA) Board of Managers announced today that John Wagner, Ph.D., will be the next director of Idaho National Laboratory (INL). BEA manages and operates the laboratory for the U.S. Department of Energy.

Wagner will begin his new role on Dec. 11, 2020. Wagner has been at INL since 2016 and has been Associate Laboratory Director for Nuclear Science and Technology since 2017.

“John Wagner possesses the qualities the BEA Board was looking for in INL’s next director: advanced nuclear expertise, managerial experience and strategic leadership,” said Battelle Executive Vice President of Global Laboratory Operations and BEA Chairman Ron Townsend. “John is a proven leader who gets results.”

Wagner’s experience is strongly aligned with INL’s programmatic portfolio. Wagner has guided and helped implement INL’s nuclear energy strategy during an innovative and exciting time at the nation’s center for nuclear energy research and development.

As a recognized expert in reactor and fuel cycle technologies, Wagner is called upon frequently to provide expert testimony to Congress and to advise in formulation of policies for nuclear fuel cycles and advanced reactors.

Wagner has more than 20 years of experience performing research and managing and leading research and development projects, programs and organizations. Prior to joining INL, he worked at Oak Ridge National Laboratory for nearly 17 years, where he held several research and leadership roles in reactor and fuel cycle technologies.

“All of us at Battelle are proud to have John Wagner as INL director,” said Lou Von Thaer, president and CEO of Battelle. “INL is a vital part of the Battelle family and I am confident John is the right choice to continue the great work being conducted by the laboratory’s more than 5,000 employees.”

Wagner earned his doctorate and master’s degrees from Pennsylvania State University and his bachelor’s degree in nuclear engineering from the Missouri University of Science and Technology. He is an American Nuclear Society Fellow, the highest honor bestowed by the Society and a recipient of the 2013 E.O. Lawrence Award and has authored or co-authored more than 170 refereed journal and conference articles, technical reports and conference summaries. Click here for a full bio and portrait photo.

Wagner succeeds Mark Peters as INL laboratory director. It was announced in August 2020 that Peters accepted the position of executive vice president for laboratory operations at Battelle.

“I want to sincerely thank outgoing Director Mark Peters,” said Rita Baranwal, assistant secretary for the U.S. Department of Energy’s Office of Nuclear Energy. “Because of Mark’s tireless efforts, and the outstanding INL staff, the laboratory is well-positioned for a bright future under John’s leadership.”

About Battelle:
Every day, the people of Battelle apply science and technology to solving what matters most. At major technology centers and national laboratories around the world, Battelle conducts research and development, designs and manufactures products, and delivers critical services for government and commercial customers. Headquartered in Columbus, Ohio, since its founding in 1929, Battelle makes the world better by commercializing technology, giving back to our communities, and supporting science, technology, engineering and mathematics (STEM) education. For more information, visit www.battelle.org.