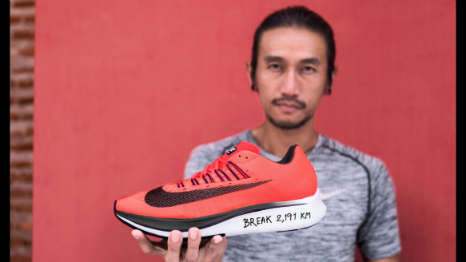 Join A Rock Star On His Epic 55-Day Run

On November 1, Artiwara “Toon” Kongmalai set out for a very long run — a 55-day, 2,191-kilometer (roughly 1,361 miles) jaunt from Thailand’s Betong district in the southern Yala province to the Mae Sai district in the north Chiang Rai province — to be exact.
There’s nothing waiting for him at the finish line. But he’s not running for himself. Toon is running to inspire the citizens of Thailand to raise more than 20 million USD for 11 local hospitals. And if each Thai citizen donates 10 baht (30 cents USD), he thinks they can do it by December 25 (the end of the run).
“In addition to raising funds to help improve the hospitals here in Thailand, I also want to inspire people to be more active and healthier, to run and exercise.”
– Artiwara “Toon” Kongmalai

Perhaps even more astonishing than his race course map and ambitious fundraising goal is the fact that Toon isn’t widely known as a runner. As the frontman of successful Thai rock band Bodyslam, Toon is first recognized as one of Thailand’s biggest rock stars. But his love for running is uncompromising, and that’s why he has made a commitment to end the year with this extraordinary mission.
To assist him in achieving his goal by helping maximize his performance and minimize his risk of injury during his journey, Nike invited Toon to its World Headquarters in Beaverton, Oregon. To discover and enhance what best aided him as a runner, experts, including the team behind Breaking2 from the Nike Sports Research Lab (NSRL) and apparel and footwear specialists, conducted analyses on Toon to gain insights into his pace, heart rate, fluid and calorie requirements and recovery modalities, as well as what shoes and apparel could best support him throughout his runs.

HERE’S WHAT THEY LEARNED:
Nike footwear specialists advised Toon to rotate between five pairs each of the Nike Zoom Fly and the Nike Zoom Vaporfly 4% running shoes over the 55-day run.
After doing a climate simulation of Thailand in the NSRL’s environmental chamber (where Toon ran at his target intensity in clothing he planned to wear during his journey), the scientists provided a plan that included when and how much fluid he should intake to aid his daily performances.
And because being able to sustain 50 kilometers a day for 55 days requires a lot (!) of energy burn and taxes the body, the scientists also offered suggestions on what kind of solid food might best sustain him during his repeated runs (they suggested homemade honey rice cakes and small jelly rolls among other things).
They also gave Toon a sensor suite to wear during each run that will provide information on his every movement and body response, which they’ll review with Toon every few weeks.
“Nike’s commitment to enabling me inspires me to push my limits even further,” says Toon.

And before Toon left, the group surprised him with a pair of Nike Air Max 1 (Toon says he’s a huge fan of this silhouette), signed by Tinker Hatfield.

“We are thrilled to be supporting Toon with his mission to show the nation just what running can do — both for a person and for a community,” says Pannee (Mee) Santiwiwatkul, Nike Thailand Marketing Manager. “Through his inspiring action, he demonstrates how sport can truly be a force for change in the world.”

Toon started his great attempt November 1. Follow every step of his journey here.
To get in on the action and to celebrate Toon’s fearless goal, Nike is inviting the public to join the last 10 kilometers of his run on December 25 as he completes his epic journey in Chiang Rai.

And if you’ll be in Bangkok on December 25, you can join the local Nike team for a special Nike Run Club session to celebrate Toon’s breakthrough while he finishes off his last leg at Mai Sai province. Details will be shared here.