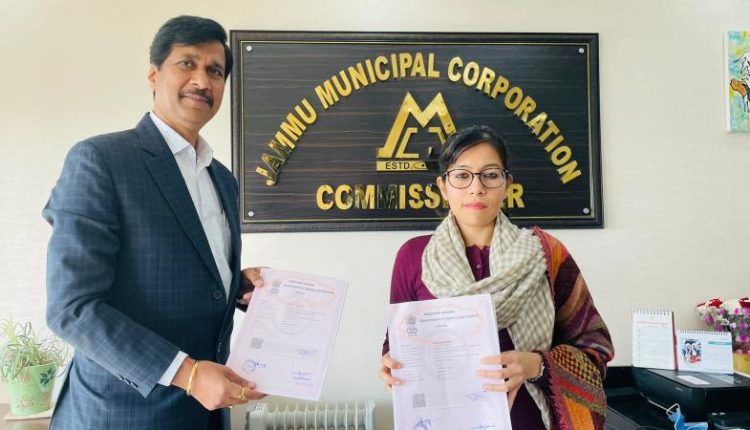 JAMMU : Smooth flow of traffic and better pedestrian facilities are on the cards as Jammu Smart City Limited (JSCL) has signed two separate agreements for the development of 23 junctions and for setting up smart traffic booths in different parts of the city.

Both the projects are being undertaken by JSCL under the Smart City Mission programme of the Union Ministry of Housing and Urban Affairs (MoHUA).

The 23 junctions across the city of temples will be developed and equipped with better facilities for citizens.

Speaking on the occasion, CEO JSCL, AvnyLavasa said that the facelift of junctions will add a neat and clean look to the city of temples. She added the completion of project will provide better facilities to citizens as well as tourists.

Ensuring all possible help to the project executing agency, Avny Lavasa directed officials to complete the project within the stipulated time frame.

Similarly, the smart traffic booths will be installed at 25 different locations across the city with an objective to provide better working conditions to traffic personnel.

In the first phase the smart traffic booths will be established at 25 different locations across the City. These locations have been identified in consultations with Traffic police at strategically important and critical junctions for smooth traffic movement.

The smart traffic booths will be equipped with modern facilities and will be able to maintain pleasant temperature inside according to weather conditions. The booths will also have single unit prefabricated toilet facility.

Speaking on the occasion, CEO, JSCL, AvnyLavasa said that these smart traffic booths are equipped with proper sitting arrangements as well as with other facilities to enable Traffic cops to deliver their duties with more dedication. She also directed the project executing agency to set up booths in the stipulated time frame.