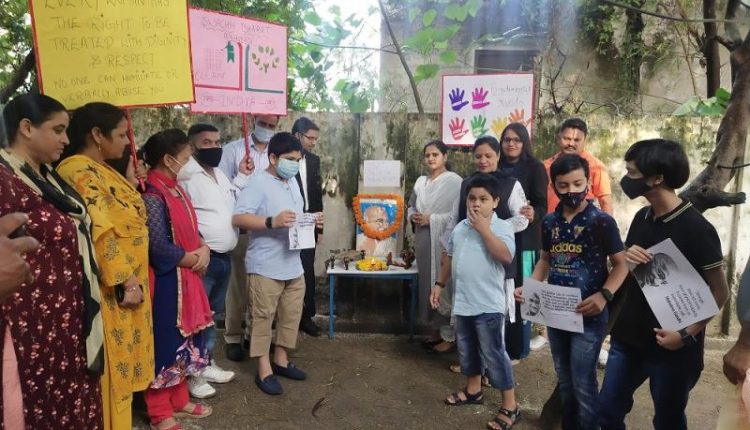 Scores of youth from different corners of the District participated and carried out Cleanliness Drive amid chanting of the slogans of Swachh Bharat Swasth Bharat. The youth wearing hand gloves collected waste including single-use plastic waste in biodegradable polybags.

Paying tributes to Bapu Ji, Principal District Sessions Judge said that Cleanliness was the message of the life of Mahatma Gandhi and ‘we must adopt Cleanliness and Swachhta as part of our daily lives and this will be a true tribute to the Father of the Nation.’ He thanked the Nehru Yuva Kendra Team for organising the program and expressed hope that such events would be carried out in the future also.

DLSA Doda ( Bhaderwah) took out a Prabhat Pheri in Bhaderwah town to celebrate the birth anniversary of Mahatma Gandhi. In the Prabhat Pheri Secretary DLSA Bhaderwah, Mudasir Farooq along with PLVs, Panel Lawyers & Officials of the Court visited the streets of Bhaderwah town along with banners. Later, the legal awareness outreach programme(Pan India) was launched in the District Court Complex Bhaderwah under the supervision & guidance of Virinder Singh Bhou, Chairman District Legal Service Authority Bhaderwah.

The campaign was started from District Court Kishtwar by paying homage and tributes to the Father of Nation on his birth anniversary. Earlier, a Prabhat Pheri was also taken out in the wee hours.

A cleanliness drive was also carried out by Municipal Staff and PLV’s across District Kishtwar.

This Prabhat Pheri was started from District Head Quarter Reasi after paying floral tributes to the Father of the Nation, Mahatma Gandhi on his Birth Anniversary and it culminated near the Ganesh Temple Main Bazar, Reasi.

DLSA Udhampur: District Legal Services Authority Udhampur today launched the legal awareness campaign under the aegis of “Azadi ka Amrit Mahotsav” here in the District Court Complex and paid floral tributes to the Father of the Nation on his 152nd birth anniversary.

A Prabhat Pheri was also organised wherein Placards for Legal Awareness were also displayed. All Panels Lawyers and PLVs, besides Principal BharityaVidyaMandir Renudogra along with students participated in the said programmes.

On the occasion Inaugural programme of legal awareness was held at district headquarter Ramban which was attended by Additional District & Session Judge Fast Track Court Surinder Singh; Secretary DLSA Pooja Gupta; President Bar Association Ramban along with bar members, judicial staff members of all the Courts, and a number of students.

The programme started with singing of National Anthem. The speakers lauded the role of NLSA and J&K LSA in educating all sections of the society, providing Legal Services to the weaker Sections by a huge network of PLVs and legal services institutions.

A Parbhat Pheri was conducted across Tehsil Bishnah by displaying Placards on various legal services schemes. The programme was attended by the members of the Bar Association Bishnah, panel lawyers, the children of adjoining villages, Para legal volunteers and staff of TLSC Bishnah.