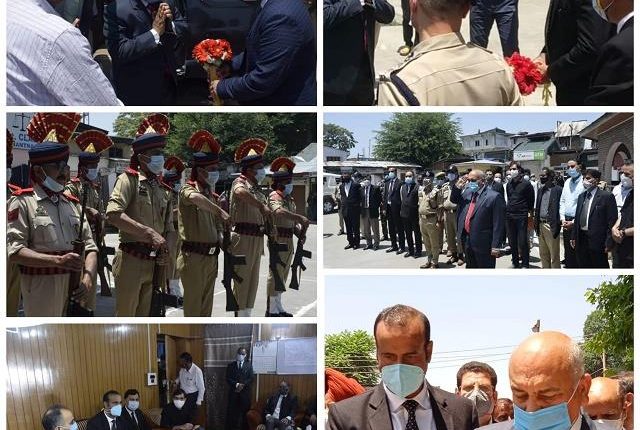 Justice Mithal held a detailed meeting with Judicial, Civil and Police officers and reviewed the infrastructural and administrative set up and functioning of courts in the district. He was apprised about the cases being litigated besides the issues related to adjudication process in the district.

Chief Justice directed the Principal District and Sessions Judge, Naseer Ahmad Dar, to establish a Vidhik Seva Kendra (Legal Service Centre) at the District Headquarter observing the centre will give timely relief to the litigant public/lawyers and other stakeholders for filing of their cases by e-mode while being at their respective places without approaching the courts physically. He also exhorted for following all directions and orders issued by High Court regarding resolution of cases in Covid times.

Deputy Commissioner, Dr. Piyush Singla, informed the Chief Justice that out of 56 kanal of state land identified for the proposed District Court Complex at Sarnal, 40 kanal has been allotted and the allotment for the rest is under process.

While directing the concerned officers and executing agencies to expedite the process of allotment and construction work on the complex, Justice Mithal said that the development of Judicial Infrastructure and provision of all requisite facilities to Courts in J&K is being pursued as a matter of priority.

Later, Chief Justice held an interactive session with the members of District Bar Association who thanked him for visiting the district. President of the Bar, Fayaz Ahmad Saudagar, raised few demands which among others included development of infrastructure in subordinate courts, provision of Chambers to lawyers and establishment of matrimonial courts.

Justice Mithal passed on spot directions for redressal of certain issues and assured all their genuine demands would be fulfilled in a time bound manner.

He also called for greater coordination among judiciary, civil and police authorities for ensuring the justice delivery becomes smooth and hassle free.