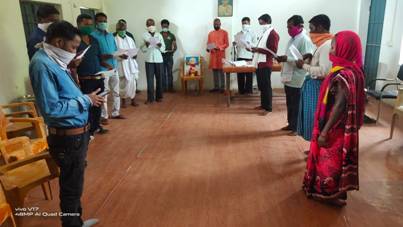 New Delhi: On the occasion of the 151st Birth Anniversary of Mahatma Gandhi, Department of Justice, Ministry of Law and Justice, Government of India, in association with Atal Innovation Mission under Niti Ayog organized a Webinar on “Citizens’ Duties for School Children: Strive for Excellence, Develop Scientific Temper and Utilize Opportunities for Education” on 2nd October 2020 at 7 PM. It was a befitting tribute to Father of the Nation on the occasion of culmination of the two-year long commemoration period of the 150th Birth Anniversary of Mahatma Gandhi. Gandhiji was a champion for advocating the importance of performing our duties as citizens in overall national development. Gandhiji firmly believed in the philosophy that the true source of rights is duties, and if we all discharge our duties, then rights will not be far to seek.
As a prelude to the Webinar, MyGov organised an online quiz competition on the ‘Constitution of India and Fundamental Duties’ from 29.09.2020 to 01.10.2020 . The quiz was intended to raise awareness on the Constitution of India and on Fundamental Duties as enshrined in the Indian Constitution, primarily for the school children. The quiz received an overwhelming response with over 49,000 online participants. 15 Winners were announced during the Webinar.

The Webinar had an inspiring line -up of speakers including Sh Niraj Kumar Gayagi, Joint Secretary, Department of Justice; Sh R.Ramanan, Manging Director of Atal Innovation Mission and Ms Dola Banerjee, Arjuna and Khel Ratna Awardee. Addressing a virtual gathering comprising of school children and students, the speakers emphasized on the importance of getting an education, developing a spirit of striving for excellence in children from an early age, and developing an outlook on Innovation and spirit of enquiry. The speakers laid emphasis on every citizen performing his basic duty of doing the work that is given to him/her with excellence.

The Webinar which was telecast live on YouTube channel ‘AIMToInnovate’ resonated very well with the youth, with more than 7000 people watching it live. The link to access the Webinar is https://www.youtube.com/watch?v=vSMK3_m7bok

Department of Justice in collaboration with CSC e-Gov is also undertaking Citizens’ Duties Awareness Programme in 1000 Digital Villages in 16 States. On 2nd October 2020, programmes were conducted in 647 Common Service Centres (CSCs) in which nearly 12000 citizens participated. Citizens paid tribute to Mahatma Gandhi and read the Preamble to the Constitution. Awareness programme on Fundamental Duties was also conducted by Gram Pradhans, Teachers and members of District Legal Services Authorities.