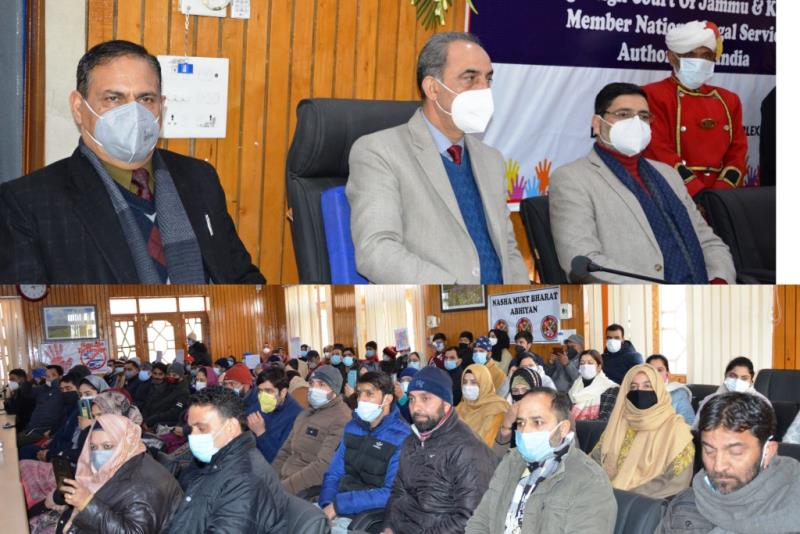 Justice Magrey presides over programme on NMBA at Budgam

Budgam: Stressing for revival of past glory and tradition of crime free society, Jammu and Kashmir High Court Judge and Chairman Juvenile Justice Committee (JJC) High Court of J&K, Justice Ali Mohammad Magrey today called upon the stakeholders to come forward to save and shape the future of our children by eradicating drug abuse in the society.

The Chairman JJC made these remarks during an impressive program convened here at New Conference Hall regarding Nasha Mukt Bharat Abhiyan (NMBA) by District Administration in collaboration with DLSA Budgam.

Speaking on the occasion, Justice Magrey emphasized upon all the stakeholders including civil and police administration, civil society, village headmen, Principles of educational institutions, NGOs, Doctors, Line Departments and DLSA to come forward and actively participate in uprooting this menace from the district.

Today, on the first day of the New Year, we should take a pledge to fight this evil and curb it, Justice Magrey said.

The Chairman JJC said that the way we take care and interest in protecting our children from drug abuse, similar interest and care needs to be shown with utmost duty to save our neighbors in particular and society at large from drug addiction.

While hailing the efforts of district and police administration in their efforts to stop Drug abuse spreading in the district, he said that the Girls nowadays are also been identified as victims of drug abuse which needs to be looked and redressed on a war footing basis.

Justice Magrey further instructed that the Drug Mafia needs to be booked under various provisions of law and shall be dealt with iron hands. He urged upon all the stakeholders to achieve the aim and objective of Nasha Mukt Baharat Abhiyan by March 2021 which is a deadline set for the Abhiyan.

PD&SJ, Raja Shujat Ali, in his address informed that since district Budgam figures one among 272 districts marked as Districts of Drug abuse under NMBA, 25 Para Legal Volunteers of the district have been declared as Master Trainers at National level and their role to realize the goals of NMBA shall prove critical in eradicating this menace.

He said, Massive awareness programmes against Drug abuse are being held in the district and these shall continue in future also.

The program was also addressed by S.P Budgam Amod Ashok Nagpure informed the meeting that Cannabis was destroyed on 162 kanal of land in the district and in addition to it, FIR against 175 person has been registered till date against drug peddlers while as another 12 persons are behind the bars at present.

The meeting was apprised by Doctor Imtiyaz Psychologist in the Health Department that alcohol and smoking are the gateway to drug abuse. He highlighted the types of drugs and medical treatment and mitigation efforts put in place by the health department.

In his vote of thanks to the chair, Deputy Commissioner Budgam, Shahbaz Ahmad Mirza reiterated that the entire District Administration will proactively pursue Nasha Mukt Baharat Abhiyan to have a glorious future ahead.