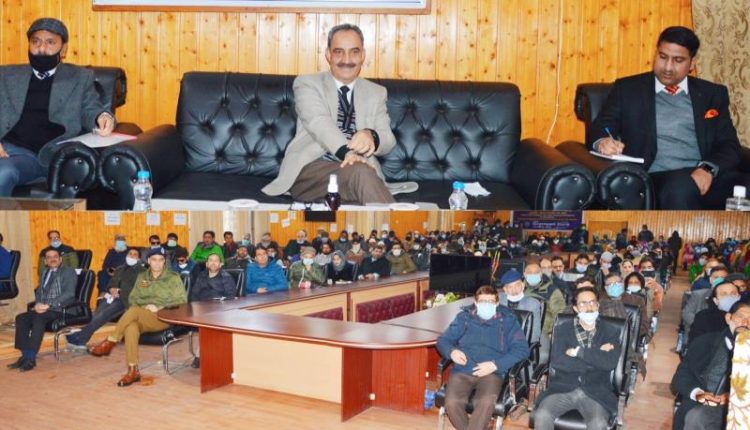 Baramulla: J&K High Court Judge, Justice Ali Mohammad Magrey today termed the social justice and equality vital for maintaining social stability. He said that the constitution of India gives some fundamental rights and liberties and there is a need to uphold them while discharging one’s duties.

The Chief Guest, during his address said that rights and duties go hand in hand and everyone should identify his/her role in the society.

Appreciating the role of NGOs, Justice Magrey said that these organizations need to be strengthened as they play an important role in social justice and empowerment. He further said that smooth delivery of justice will be ensured only if the govt functionaries and other stakeholders perform their duties with open conscience and with full devotion.

Justice Magrey also added that social injustice is a threat to the stability and sustenance of a society and every effort should be made to ensure that justice and equality prevail.

Justice Magrey, who is also the Executive Chairman of State Legal Services Authority highlighted the role of judiciary in carrying out welfare activities outside their domain of work as what is termed as Judicial Activism.

He gave a brief appraisal of National legal Services Authority Act and said that judiciary is playing its part in this regard with zeal and vigor.

The Deputy Commissioner, in his address underlined the role of NGOs towards dissemination of justice and said that district administration works in tandem with several NGOs while carrying out various welfare activities.

He added that welfare of the society is possible only when all the stakeholders play their constructive role in their respective domains. Moreover, DC said that there is a need to widen the social base of NGOs so that their range of activities is expanded positively.

On the occasion, an array of lectures were presented by the resource persons comprising legal experts, paralegal volunteers and other eminent personalities who highlighted several aspects associated with the role of NGOs towards social justice and equality.

Earlier, Principal District and Sessions Judge presented the valedictory address wherein he welcomed the chief guest and other participants. He gave a brief introduction of District Legal Services Authority (DLSA) Baramulla and highlighted its role towards welfare of the society.

Secretary DLSA presented the vote of thanks during which he expressed gratitude to the participants who showed their enthusiastic participation in the programme.