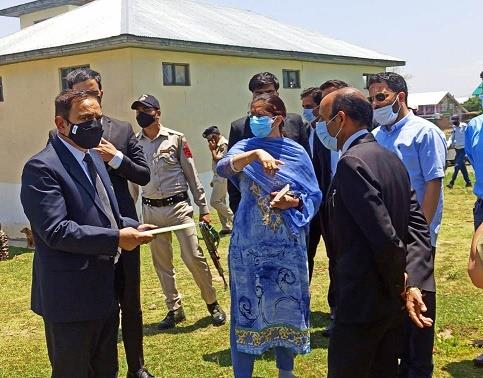 On the occasion, Justice Sindhu took note of the functioning of the Court Complexes at Chrar-e- Sharief and Chadoora. She held an extensive meeting with the officials of Judiciary, Police and the Local Administration at both Courts Chrar-e-sharief and Chadoora.

Justice Sindhu was apprised about the administrative functioning of the Courts and also about the legal infrastructural set up of these Courts by Principal District and Sessions Judge Budgam.

She also examined the functioning of the cases being taken up via virtual mode and also the mechanism adopted by the judges in reference to the same.

Justice Sindu later visited the proposed sites for the New Court Complexes of Chrar-e-sharief and Chadoora along with District Judge Budgam, SDM, Executive Engineer(R&B) Budgam, Tehsildar Chadoora & Char Sharief and took note of the allotment and construction of the new Court Complexes.

She directed the officers in charge to expedite the work related to allotment and start with the construction of the said project at the earnest. She emphasised that all these matters pertaining to the Court ought to be pursued on top priority as it being a matter of public interest.

She further emphasised upon creating requisite infrastructure in all courts of District Budgam including New Court Buildings equipped with all necessary facilities, residential quarters, parking facilities. She reiterated that to materialize this, all departments have to envisage their co-operation, support and assistance.

Justice Sindhu directed Pr. District and sessions Judge to take on board, the concerned revenue department through Deputy Commissioner Budgam in facilitating the smooth and hassle free acquisition of identified land and also initiate the process of all logistics for construction at Chadoora, Chareshareef, Beerwah and Magam.