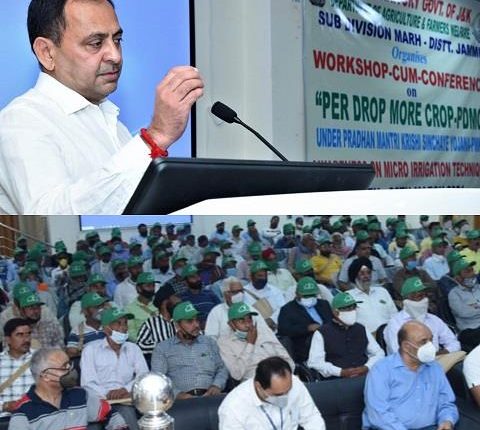 The ceremonial lamp was lit by Director Agriculture Production & Farmers Welfare Jammu, K. K. Sharma to mark the inauguration of the Progarmme aimed at the technology dissemination among the farmers, officers and field functionaries of the Agriculture Department, who participated in good numbers from all zones of Marh Sub Division.

In his Inaugural address, K. K. Sharma spoke about the vision of ‘per drop more crop’ envisaged under Pradhan Mantri Krishi Sinchayee Yojana and the objective of better on farm water management for further ensuring expansion of cultivable area under assured irrigation.

The Scheme, he said, is equally significant for un-irrigated areas and the irrigated areas as on the one hand it aims to expand and increase irrigation facilities, it also aims to enhance on farm water usage efficiency by use of precision irrigation technologies.

The participating farmers were exhorted upon to take full advantage of the workshop to update their knowledge and adopt latest, efficient and water saving irrigation Techniques through use of Micro Irrigation Systems that include Sprinkler Irrigation, Drip Irrigation, rain Guns etc.

Joint Director Agriculture (Extension) Jammu, Shahid Iqbal Sheikh apprised that only 40% area in UT is under Irrigation and there is great potential to increase the area through proper implementation of Prime Ministers Flagship Programme PMKSY.

Chief Agriculture Officer, Jammu stressed on spreading mass awareness regarding various subsidy components and guidelines of schemes among the farmers.

During Interaction Session, the progressive farmers of different districts raised various queries and issues which were replied by the officers and technical experts.