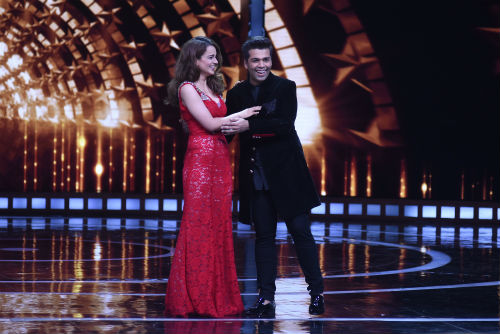 Mumbai: When we speak of Bollywood, Kabhie Khushi Kabhie Gum (K3G) is one of the most talked about films worldwide. While shooting for a reality show, Karan Johar and Kangana recreated the famous scene of Shahrukh’s entry in the episode.

Karan and Kangana have been in the news after the latter had accused KJo for giving chance only to his follow industry friends on the big screen, the two decided to let go off their differences and come together on India’s Next Superstars. The perfect example of #NaKhaandanNaSifaarish, Kangana will be seen as the guest judge this weekend.

Rohit Shetty wanted to create some light moments for the audience to take back in the episode, hence he insisted that KJo and Kangana recreate a scene from K3G. Rohit said, “We’re going make K3G part II right here, I will direct the scene with Karan playing the role of Shahrukh and Kangana as his girlfriend, just to improvise.”

It was then that KJo recreated Shahrukh’s entry on the show and Kangana touched his feet to seek blessings with an aarti ki thaali.

We can’t wait to capture this moment on television!

Watch India’s Next Superstars Mon-Fri at 10:30pm and Sat-Sun at 8pm only on STAR Plus