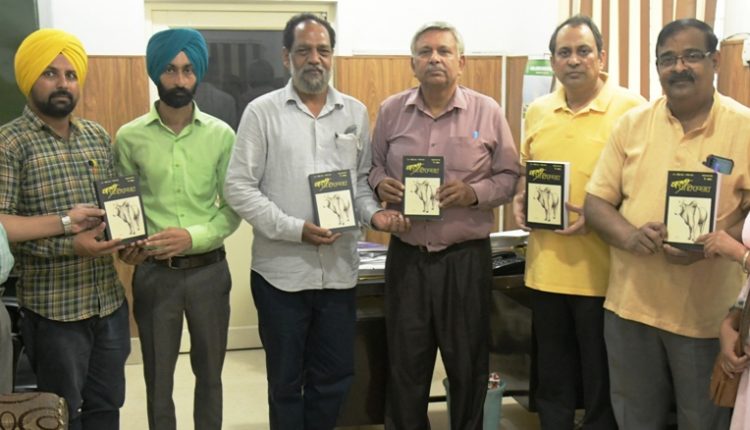 Aligarh: “The new generation wants a chance for a deep, personal attachment from their literature. They want books that fulfill their desire to connect with the emotions and banalities of everyday life”, said Professor Kranti Pal, Chairman, Department of Modern Indian Languages, Aligarh Muslim University (AMU) in releasing the 101st edition of ‘Kahani Punjab’, the Punjabi language literary magazine committed to explore new frontiers of literature, artistic criticism and aesthetic effect.

The release ceremony at the Public Relations Office was jointly performed by Professor Shafey Kidwai, Professor Mohammad Sajjad, Mr Ajay Bisaria. The book has exquisitely crafted, multigenerational short stories, essays, articles and dialogues that sweep from time periods set in the past to the present day.

“Short stories and articles by contemporary writers giving a chronicle of the tragedies of encounter with the Covid pandemic, the cynicism and despair that accompanied it, and the resilience and strength of the human spirit have been included in this edition”, said Prof Kranti Pal.

He stressed that these narratives are paced in a real-time narrative of lock-down days and since the pandemic had lasted long enough it was imperative to have literature in its backdrop included in the edition.

“The literary response to historic tragedies has been a process of absorbing trauma —expanding to narrative literature. The pandemic has now lasted into a second year for publishing, and a growing number of authors are working it into their books”, said Prof Kranti Pal.

He pointed out that the book also contains interesting biographical sketches of several literary and academic personalities including the description on Ganda Singh, Punjab’s first historian and Padma Bhushan awardee, who wrote his doctorate thesis under the supervision of Prof Mohammad Habib at AMU.

“Kahani Punjab delves into various aspects of what new readers of the sonorous Punjabi language want to read. The stories, articles, essays and dialogues in this edition discuss the day to day happenings and the evolving face of Punjab in the first half of the century, the pain of Partition, the changing urban landscape and the thus altered social-cultural fabric”, said Prof M Shafey Kidwai, Member-in-Charge, Public Relations Office.

This edition showcases the critical acuity and editing brilliance of Dr Kranti Pal, he added.

Impact of Pandemic on Organisations” to be published in ‘Abhigyan’- peer-reviewed, journal of Foundation for Organisational Research and Education’ (FORE)

iednewsdesk Jan 28, 2022
Researchers analyzed chipped stone tips made by a population that lived in Brazil between 11,000 and 5,000 years…