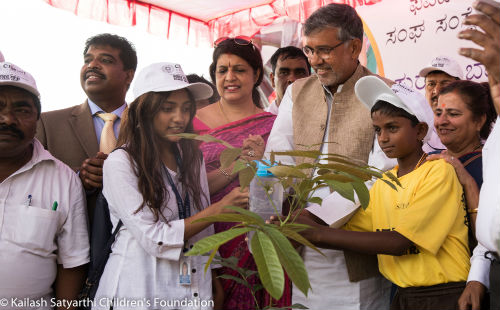 Kailash Satyarthi calls for urgent need to have a public, sex offenders’ registry

The Nobel Laureate and his co-marchers were received by Ms. Kripa Alva (Chairperson KSCPCR), who flagged of the Bengaluru stretch of the Bharat Yatra, in Karnataka. Mr. Satyarthi said, “India boasts of great scientific knowledge and talent. We should use our knowledge and expertise to build a robust public sex offenders registry. If a comprehensive skill registry can be built by us, then so can a public sex offenders registry, to make India safe for our children.
I urge all software engineers, disruptors, innovators and scientists to join hands and come together in building this for our country”

The march in Bengaluru from ITI grounds near NIMHANS to Christ University campus, led by the Nobel Laureate witnessed thousands of students, youth, working professionals join the Yatra. They pledged to protect the children of India from these heinous acts and demanded a stop to child sexual abuse, called for better laws in the country.

The Yatra marchers appealed to the conscience of the youth of Bangalore and asked them to do everything in their power to protect the future of this country-our children.

At Christ college, addressing thousands of students, to generate awareness about the growing crimes of child sexual abuse and trafficking, Mr Satyarthi also emphasised the importance of technological innovation and urged the people of Bengaluru to harness the power they possess and engineer a revolutionary social change using it.

Said the Nobel Peace Laureate, “What better city than the Silicon Valley of India to lead this war? Across the world, Bangalore is acknowledged as a hub of IT and innovation. If innovators and entrepreneurs can deploy technology to change our day to day living, surely we can together come up with technology to protect our children? Our smart phones can help provide us with any information from across the world. They are supposed to be theft proof. Surely our young innovators and scientists can create new apps that will help us protect our children more effectively? Simple things can make a big difference.”

Ever since its launch, Bharat Yatra has been drawing enormous support from citizens across India, including Amitabh Bachchan who tweeted to his fans to support the Yatra. Earlier, Union Minister for Shipping and Finance Mr Pon Radhakrishnan had flagged off the Yatra from Kanyakumari along with Mr. Satyarthi. In Trivandrum, Kerala Chief Minister Pinarayi .

Vijayan assured whole hearted support from his government in eradicating the menace of child sexual abuse and trafficking.

Prime Minister Narendra Modi had sent a personal letter to Kailash Satyarthi extending his support to the Yatra, which will cover 11000 kilometres across 22 States, including Karnataka. Some of the key cities it covers include Chennai, Bangalore, Hyderabad, Mumbai, Guwahati, Bhopal, Jaipur, Srinagar among others.

At Kanniyakumari during the flag off Mr Satyarthi had declared, “I will not rest till children of this country are not safe. I am not going to stop fighting if the raping and abuse do not stop. I cannot sleep in peace until we win our war against rape and abuse. This moral epidemic haunts our nation, and it is time we fight against it, together.”

Re-iterating his mission behind launching the Bharat Yatra, he said “Why am I marching? Because my children are being raped. I refuse to accept that eight children go missing and two are raped every hour. Each time if a single child is in danger, India is in danger. Bharat Yatra is to make India safe again for our children.” Kailash Satyarthi has been campaigning for the freedom, safety and security for children across the globe for the past 36 years. His Nobel Peace Prize (2014) was for his continuous efforts and struggle for the rights children.