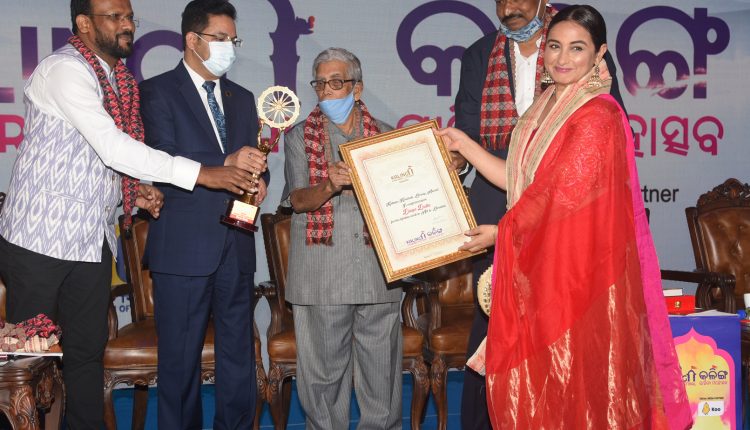 Bhubaneswar, December 10: Business journalist Tamal Bandopadhyay, Bollywood actress Divya Dutta and Sudha Murty, wife of Infosys founder Narayan Murty and former West Bengal Governor Gopalkrishna Gandhi were among others who received awards for their books on the inaugural day of Kalinga Literary Festival 2021 in the temple city of Bhubaneswar.

Inaugurating the Kalinga Literary Festival, Hon’ble Odisha Tourism Minister, Shri Jyoti Prakash Panigrahi said for the last eight years Kalinga Literary Festival has set a national benchmark in literary festivals. KLF is well known for its socially relevant themes and in a way compels all ‘creative’ people to think and articulate ‘the contemporary’.

Kalinga Literary Festival (KLF) has emerged as one of the leading literary platforms in India, attracting both experienced and young litterateurs. Bigger than ever before, the eighth edition of the festival will bring nationally and internationally acclaimed names on one platform to discuss, debate and explore commonalities in the diverse voices in literature, said Mr. Rashmi Ranjan Parida, the founder director of KLF.

A total of 30 awards were given away to eminent authors and translators of repute by the organisers of Kalinga Literary Festival on its eighth edition held here. The names were decided for the past two years since the festival could not be organised last year due to Vivid pandemic.

Tamal Bandopadhyay was awarded best writer in the Economy category for his book “Pandemonium: The Great Indian Banking Tragedy”.

For non-fiction category Sandeep Bamzai’s book “Princestan: How Nehru, Patel and Mountbatten Made India” was selected among other two books in the same category.

For Children’s literature section Sudha Murty was selected for her book called “Grandparents’ Bag of Stories”.

Bollywood actress Divya Dutta was awarded as the Women Writer during the event.

Mr Gopalkrishna Gandhi said Odisha’s gopabandhu Das has shown the way a fearless writer should behave as he had the courage to pen his thoughts staying inside a British prison. He said all the writers should follow his life story as a guide to become a fearless writer, the hallmark of a matured society.

‘Romancing In 40s is not bad, have to accept it’: Ms Dutta

Speaking about her career in Bollywood and about rejections in her initial days Ms Dutta said , “I am now romancing with heroes in my 40s which I had dreamt of during my 20s. But I am doing it because I know that the work you do will remain forever if you have invested your passion in it.”

While commenting that the movie ‘Veer Zara’ has been a milestone in her career, she said the inspirations have compelled her to write her book “Stars in My Sky.”

She was awarded with Kalinga Literary (Woman Writer) Award during the inaugural ceremony.

The three day extravaganza of literature, art, culture and conversation will feature poetry sessions, panel discussions and talk shows and many more in 45 sessions.