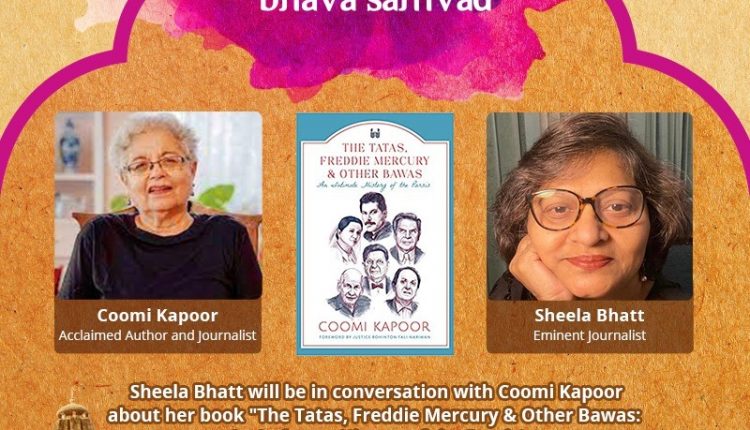 Sheela went on to begin the session by asking for a brief glimpse of Parsi community. “A lot of people might not be knowing Parsis well. Parsis are full Gujaratis. Tell us about the today’s culture and customs of Parsis,” she asked.

Coomi said, “Parsis are a very small community but have made their presence well felt. Though we speak Gujarati, we have our own way. There are some distinctive features, centricity that have defined points. We have a great sense of honesty, truthfulness, outspokeness, and humour. We are also ardent music and food lovers.”

CENTA® Announces The Winners of the 7th Edition of CENTA®…

Answering about her idea of the book, Coomi said, “The one reason I was keen to do the book was I felt it was a beautiful story.  And there was no right or wrong in it. There are three main characters in the book. As I have strongly portrayed in the book that Parsis have the strong belief of virtue and righteousness. And all three main characters think in this way and go ruthlessly about the fight with this in the mind. Parsis never let go in a legal battle no matter whatever the consequences would be. In this case, the consequence of the mystery was huge. The entire financial empire is at stake.”

“How do you look at Ratan Tata’s personality,” questioned Sheela. “Ratan Tata is one of the most iconic figures and the most respected businessman of India. One thing I have noticed in Parsi industrialists is their courteous mannerisms. He keeps exercising the fact that Tata is not just a Parsi farm. Its an Indian group. But I think most Parsis look at it differently because Tata was a quintessential Parsi group when it started,” Coomi stated.

“Do you think Ratan Tata and Nusli Wadia will take up this issue of Parsi community, their customs a little liberal,” Sheela followed up.

“I don’t think Ratan Tata interferes in community matters at all. Being industrialists, they donate to Parsi as well as secular charities. Mr. Cyrus Poonawala takes participation in the community matters to an extent,” Coomi opined.

To conclude, Coomi said, “Its not a late realisation of my identity. It was always there as a part of me. But I think that by writing this book and investigating my community for several years, I learnt a lot. I became more prouder of the fact that I am a Parsi.”

Prof. S.K. Palita holds the charge and performs the duties of the Vice-Chancellor of Central University of Odisha

CENTA® Announces The Winners of the 7th Edition of CENTA® Teaching…