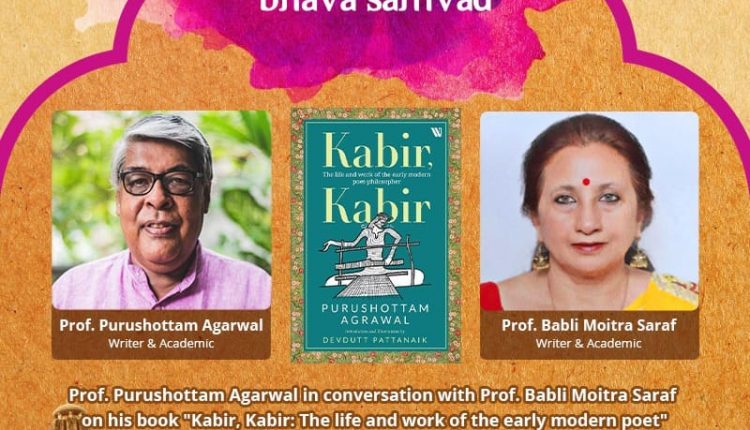 Beginning with the session Prof. Babli Moitra Saraf quoted the book as ‘a great act of storytelling’. Prof. Purushottam stated, “Its a book about history of ideas, evolution of morality. Its core idea is individuality, moral choice and so on. My argument in this book is that the pre-British India was not a static society. I have given some detailed statement to internalization knowingly or unknowingly. If you find so much of Nathpanthi elements in Kabir, it is because his recent forefathers were recent converts from Nathpanth Yogis to Islam. If you find so much of Hinduism in Kabir, then certainly he had if not Bramhin but Hindu blood. If you find so much of Islam in his poetries, its because he was a Sufi.”

Commenting on Kabir’s narrative, Purushottam says, “In his narrative, he has represented and reflected his times. In the same way, Surdas from Gwalior has composed Mahabharat in Hindi. Ramcharitmanas by no stretch of imagination is a translation of Valmiki Ramayan. So, this vernacular intellectual fermentation led to the creation of public sphere of Bhakti.”

“According to Yogis, Gorakh is the liberator, according to Hindus, Ram is the liberator, and Islam is based on monotheistic theory of God. But Kabir says, ‘My God dwells in the entire universe in the existence of a whole’. He has given a distinction from all the theological systems or traditions available at that time. But he never said that he wasn’t born a Muslim. He is clear and so are his contemporaries. I have tried to give a different outlook or perception about pre-British India in this book,” he added.

In his statement, he also said that language holds a key role in India. “There’s is something we can be really proud of, but we are not aware of it. Almost every Indian, by definition, is bilingual. And many educated ones are trilingual. We Indians are bilingual or trilingual by circumstances or divine power,” said Purushottam.

Indian Panorama calls for entries for 52nd edition of IFFI