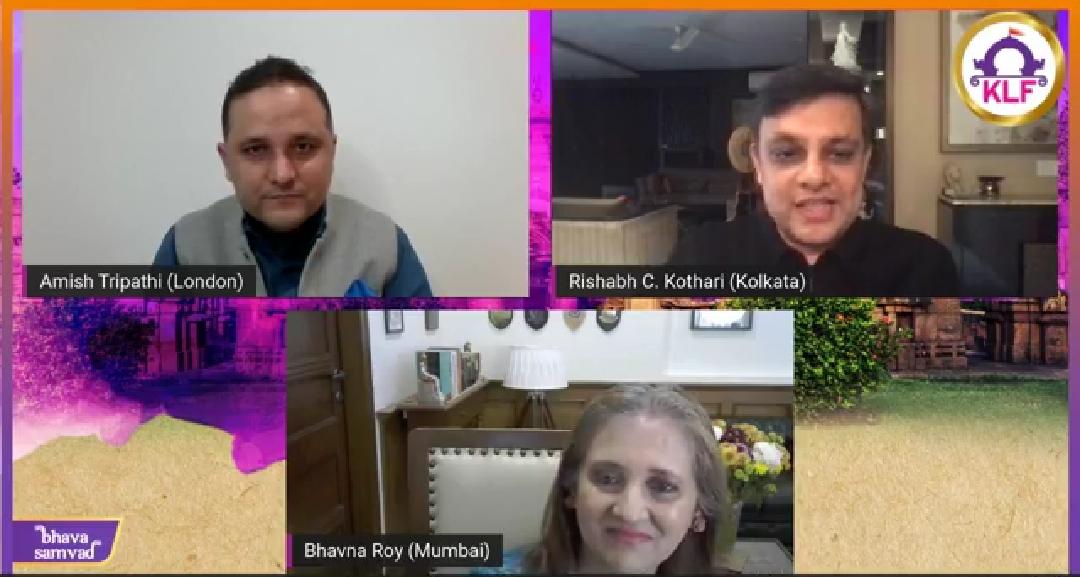 Beginning with the session, Rishabh mentioned that concept of life is one of the biggest literary contributions of Amish.

Amish said, “Dharma is not Religion. In modern world, it is made to translate to religion, but it’s not religion. Correct Sanskrit term for religion is pant, not dharma. Dharma is beyond religion. Dharma consists of dhatu dhru, that which sustains, that which binds. It’s very difficult to find one packed word in English.

In Dharmic religions, you’re treated as an adult, not as a child. God won’t say do this and this, and you’ll go to heaven I’m not saying if it’s right or wrong

“In dharmic religions, No one judges you, even God doesn’t judge you. Your only task is to understand Dharma and then do what you think is right and live with the consequences (positive or negative). In some ways, it is very scary: there’s no God who’ll come and do things for you. but in some ways it is very empowering: whatever happens to you is in your hands.

Whatever you’re facing right now is the result of your Karma in relation to your Dharma of your previous lives and your life till now. If you wanna change it, change your understanding of dharma and change your karma. It is such an empowering philosophy,” he continued.


Amish further tells, “There is the path of gyan yog and bhakti yog. Iskon does it so beautifully with their Satsang. There’s also a path of Karma yog. An expression of knowledge itself helps you grow.

There’s so many tools available in Indic religious thought. I would call it the way to unite the divine and spiritual thought. We are the only pre-bronze age culture which is still alive.

People have faced so much pain, chaos, economic destruction, loneliness over last year. There could be 2 ways possible: one would the like the roaring ways in the 1920s in USA as a reaction to WW1 and Spanish flu. Most people thought why not enjoy life if we have to die anyway. The other route is this could be a period for many to take a step back and think whatever we’re doing with our life.”

Giving a glimpse of lessons in 2020, he said, “We have discovered in this last one year that we don’t actually need that much. We drive ourselves crazy to buy ourselves things that we actually don’t need.

How much pleasure are we gonna get if we give more of our time and money in helping others, doing charity, finding spiritual path. That could be a path of rediscovery of spirituality, rediscovery of deeper way of living, of evolving. I think India can play a very big role in this conversation because we have the tools, texts, practices to help ourselves and humanity. But all we need to do is revive them in India.

One of the interesting things to note is that much of the world we’ve seen in last 70 years, in which per capita violence has been the lowest in the human history and per capita income has been the highest, per capita poverty is lowest in human history. Middle class is leading a lifestyle better than what royalty lived 150 years ago. It has been a fantastic 70-75 years as a whole for humanity. Most of it was created by men and women who went through the suffering of 2nd world war. Last 70 years have been the purple patch for human history. Mother nature gave us a gentle slap to make us step back because lot of the material comforts we’ve got are by destroying the mother nature. Humanity evolves only when faced with challenges. India is one of those fewer places where you can be religious and scientific at the same time.

Bhavna Roy threw light on the conceptualization of the book. She said, “We are a big fat Indian family. We are talkative, opinionated, boisterous and ruckus.

Brother Anish suggested to write Philosophy with back end story and a non fiction flip. So I began the endeavor. I wrote around 20 pages of Philosophy on Language of Symbology and self discovery(dharm, karm, bhumi pujan)

Amish very respectfully, very forthrightly said to me didi this is very theoretical, not readable at all. You’ve gotta make it fun, light, practical and interesting to people who want to read this subject. He said you have to write this book for a person like you who is so deeply immersed in these philosophy.

He created this wonderful family. Old couple Lopamudra and dharmaraj and their daughter Gargi.”

She further told, “Chief guru-shishya relationship was between a father in law and a son in law. It was a brilliant conceptualization by Amish.

Covid times came in as an opportunity.

It is natural that in this world, the streams have to merge.

Social media has turned the human experience topsy turvy. The communication revolution of social media is going to reduce the invention of printing press to a footnote in human history.

You must give it from the best of the position to offer when I say from the heart.

Up to 90,000 children in central Mozambique urgently need humanitarian assistance in wake of Cyclone Eloise