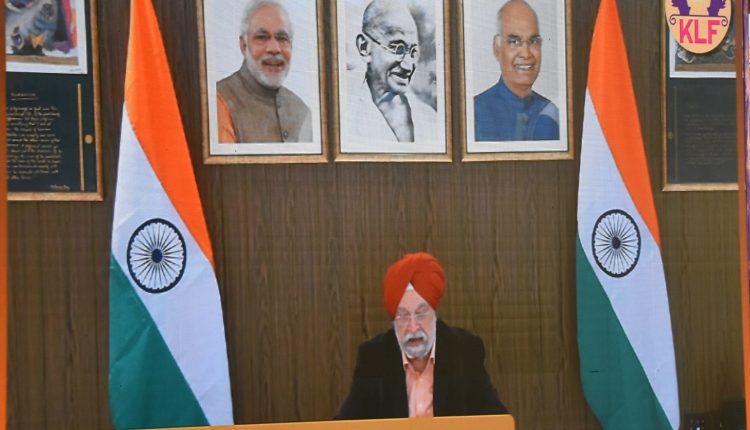 Bhubaneswar : The Kalinga Literature Festival has been able to offer an unique experience that will better Indian society, said Hardeep Sigh Puri, Union Minister on Petroleum and Natural Gas and Urban Affairs  while attending the concluding day of eighth edition of Kalinga Literary Festival here.

As the pandemic has offered all of us a chance to reconnect with ourselves, it is time for us Indians to decolonise our minds and out own literary achievement, he added on the valedictory session of the literary festival , attending via video link from New Delhi.

“The three-day event was roaring success as it held there was discussions and insights on India’s world-class literary culture and how to preserve its rich legacy, Puri said.

The Union Minister praised organisers of the prestigious literary events for hosting the eighth edition of event physically this time since it could not be arranged last year  and for hosting nearly 300 ‘Bhav Samvad’, a digital discussion on literature and major issues of our society.

The three-day long literary festival is proud to have hosted doyens of literary and creative minds of India and of global reputes. The festival has become the best platform for intellectual and thinkers alike. We will be organising an edition of KLF in Kathmandu, Nepal from next year,” said Rashmi Ranjan Parida, founding director of Kalinga Literature Festival.

On the concluding day a total of 30 sessions were held simultaneously on subjects such as ‘Atmanirbhar Bharat : Path Towards a Global Economic Power, Translation, prose literature , Odissi Music , discipline of poetic life, role of newspaper and radio in the time of  disruptive media, publishing of vernacular literature , historical fiction, the millennia generation and women of India, analysis on Odia autobiography, fiction writing along with sessions on writing workshop, poetry recitation and on musical performances.

Print and Digital Media will have to coexist : Outlook magazine MD

Speaking on a discussion on the future of print media and radio in the time of disruptive media, Satish Padmanabhan, managing editor of Outlook magazine said, “these days the social media and some times other digital media publish a lot of unfiltered content which is like a double edged sword. While it is necessary to promote freedom of expression, at the same time there is no scope of verifying the content, which is still a hallmark of traditional media.”

However, both types of media has to feed off each other and they have to coexist, he added during the discussion on the concluding day.

In the inaugural session of the concluding day of Kalinga Literary Festival 2021 , former Indian ambassador to Nepal Mr Ranjit Rae said India needs to act upon two areas to become atmanirbhar which is identifying and promoting areas where India has competitive advantage and investing in future technology such as 3D printing.

He also remarked that the international  business agreements which have been announced by the Government of India must have to meet their logical end to make a resilient India which will be a right step towards Atmanirbhar Bharat.

Corporate funding in sports should not based upon immediate return : Pramod Bhagat

On the third day of KLF, a discussion was held on private and corporate finding in sports in India and its current trend. Speaking on the occasion Paralympic  medial winner Pramod Bhagat said, “Corporate investment in  sports should not be based upon return on investment concept alone, since it requires nearly a decades of effort to produce an Olympic level sports person. They should have long term vision while planning an investment in this area.”

He also lauded  the efforts of Odisha governments in this regard to promote sports in the state and listed out some notable investment in this regard such as announcement of 89 multi- purpose stadium across the state.

On the concluding day there were 10 book launches including the Second Innings ,edited by sports journalist Ayaz Memon. During the three day event a total of 30 books were launched. In the mystic Mic programme on Sunday total of 20 performers showcased their talents to an enthralled audience in form poetry recitation.