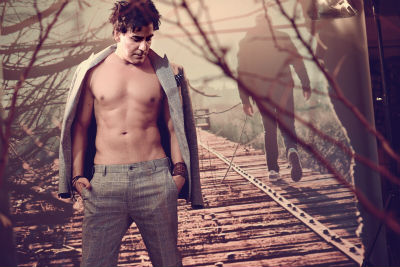 New Delhi: The year 2017 witnessed innumerable content driven movies striking a chord with the audience. When big-budget flicks like ‘Jab Harry Mets Sejal’ and ‘Tubelight’ had a bad fall, content proved itself as the king. Today, the star cast and budget really do not matter, what matters is the potential that the script holds. Understanding the new black, Karan Oberoi has also shifted his focus from the mainstream commercial projects towards the parallel cinema that talks about sense.

Karan, who is gearing up for the release of his upcoming movie “Strawberry Point’, said, “today’s audience is looking for meaningful films. They no more can be appealed and pleased by magnificent locations and big stars. Hence, as a part of this industry, we need to bring out something extraordinary that meets up to the expectations of the viewers.”

Strawberry point is going to be India’s first single-character movie. Speaking of how he came on board, Karan said, “The idea of making this film didn’t come to my mind. It’s actually director Prabal Baruah’s brainchild. He came to me with the script and I was completely blown by what I read and immediately volunteered to help produce it. After few discussions, we decided to get together and make it the first release from our production house.”

But apart from it being a single character movie, what’s the engaging factor about the movie that will persuade the audience to come to theatres?

Answering the same, Karan mentioned, “Strawberry Point is a suspense thriller and will keep you guessing the climax till the last frame of the film. It’s a thrill a minute film where every second will add to the intrigue and allure.”