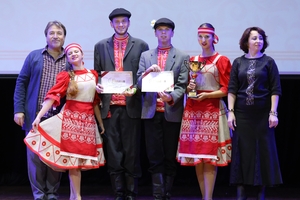 The final of the project took place in Kazan.
The strongest artists from all over the country were invited to the festival, who became the best in their regions at the previous stages.

Members of the folk dance group “Karelian souvenir” of Petrozavodsk State University presented to the jury the Karelian dance “Guys from another village” choreographed by the famous Karelian choreographer Vasily Ivanovich Kononov. The Expert Council awarded the Karelian Souvenir collective the title of Laureate of the 1st degree in the Folk Dance nomination, as well as a special prize “For the Preservation of National Cultural Traditions”.

In addition to competitive performances, the guys got acquainted with the history, culture and traditions of Kazan.

Conversation on training personnel for the forestry complex