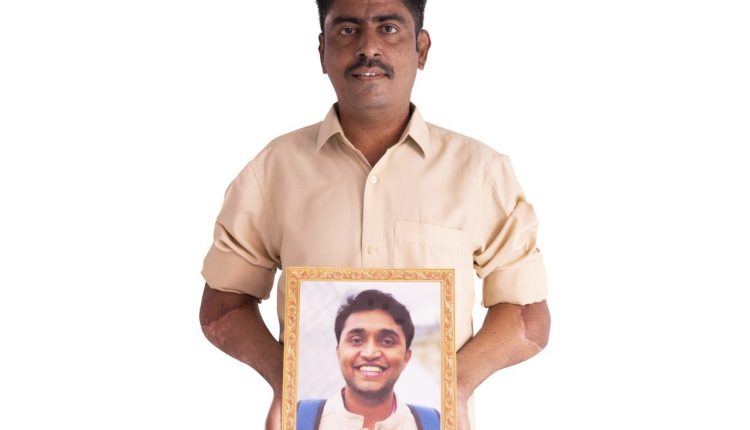 The deceased donor, a 25-year-old Kerala youth, suffered from an illness and was declared brain-dead in September 2021 at Kochi This is the ninth double hand transplant conducted at Amrita Hospital since 2015

BENGALURU : A 34-year-old boiler operator Basavanna Gowda, working in a rice mill in Karnataka’s Bellary district, lost both his hands in an electrical accident a decade ago. He has now got a new pair of hands in a very complex but successful hand-transplant surgery at Kochi’s Amrita Hospital that lasted 14 hours.

The transplanted hands belonged to Nevis Sajan Mathew, a 25-year-old deceased youth hailing from Kottayam district in Kerala who was pursuing Masters in Accounting in France. On a visit to the state on a holiday from France, he suffered from an illness and was declared brain-dead at a hospital in Kochi on September 25, 2021. His parents — Sajan Mathew and Sherin – readily agreed to donate their son’s various organs, including his hands, immediately following his death, and that is when Basavanna’s long wait for a new pair of hands came to an end.

Basavanna suffered a high-tension electrical burn injury in July 2011 at his workplace in Bellary that badly damaged both his hands, turning them lifeless. Following the accident, he was rushed to a hospital in Bellary and later shifted to Bengaluru, where doctors had to amputate both his arms just below the elbow. After despairing for many years, he finally enrolled with the hand-transplantation unit of Amrita Hospital in 2016, praying for a miracle. After a pair of hands were retrieved for transplantation from Nevis Sajan Mathew, the team of surgeons at Amrita hospital rushed Basavanna into the marathon surgery.

Said Dr. Mohit Sharma, Professor, and Head, Centre for Plastic & Reconstructive Surgery, Amrita Hospital, “the transplants were done in the upper third of the recipient’s forearms. It was a very complicated surgery because, at this level of limb transplantation, only one-third of the natural length of arm muscles are present in the recipient. We had to bring the rest of the muscles from the limbs of the donor and overlap those over the existing muscles of the recipient’s hands. Even the union of the two bones was complicated as we had to bend the joining plates exactly to the shape of the bones. Most important thing was to reduce the ischemia time, which is the period between the cold perfusion of the donor hands and their warming up later by restoring the blood supply. This was done by rapidly joining the arteries and veins to restore blood circulation and using a new oxygen-carrier Hemo2 Life, French technology developed by Hemarina company. Later, all the nerves and muscles were repaired, followed by skin closure in the end.”

Said Dr. Subramania Iyer, Professor, and Chairman for Center for Plastic & Reconstructive Surgery, Amrita Hospital, Kochi, who led the team of doctors for surgery along with Dr. Mohit Sharma, “the patient’s surgery was highly successful and he was discharged from the hospital after a few weeks of remaining in the transplantation ICU. He now needs to undergo a daily routine of active and passive physiotherapy, including muscle stretching. He will also have to take sessions of nerve stimulation to improve the nerve growth and quality of function of the new hands. Thereafter, he will have to

undertake muscle strengthening exercises, followed by occupational therapy and the application of various types of functional splints to facilitate his daily activities. This will continue for at least one year to ensure a good functional outcome. He will be able to actively move his fingers only after a few months. The patient also has to take lifelong medications to prevent the rejection of the transplanted hands.”

Basavanna and his family, including his wife Anitha and parents, Ramakrishna Reddy and Jayamma, are elated and cannot thank the doctors of Amrita Hospital enough. Basavanna said: “I was devastated after losing both my hands at such a young age. Without my hands, I wouldn’t have been able to do any job. The future looked dark. After receiving new hands, I feel that I have got a new lease of life. I now look forward to leading a normal life. I thank the doctors of Amrita Hospital from the bottom of my heart for giving me a second chance.”

This is the ninth successful hand transplant done at Amrita Hospital, which pioneered hand-transplants in India by conducting the country’s first such transplant on a 30-year-old man, Manu, in January 2015,

Said Dr. Mohit Sharma: “Six patients are currently waitlisted for hand transplantation at our hospital. Even though multi-organ donations from deceased people have been increasing in the country, instances of donations of hands have been very low because of fear of mutilation of the body. The donor’s family hesitates to permit hand donation due to this. We take special care to fit the donor body with prosthetic limbs to avoid any disfigurement, this helps the families to come forward and make the choice in favor of donation.”

iednewsdesk May 19, 2022
Muslims have shared their experiences of living with mental health problems as part of a training course…

University of Liverpool: Developing a next-generation therapy for knee…