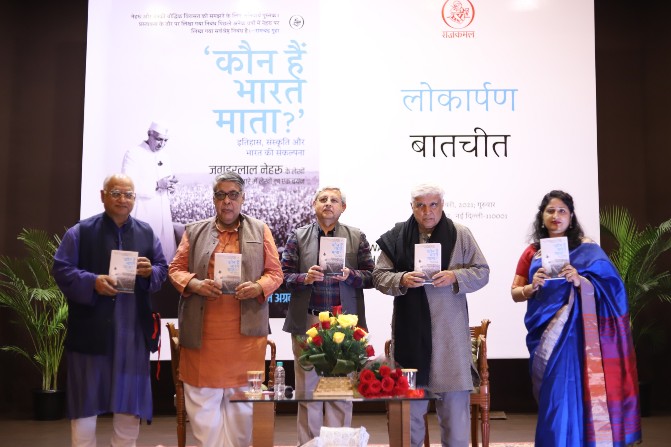 Nehru had a dream of a society which had critical thinking: Purushottam Agrawal

New Delhi: It was not possible to take the country forward by denying the plurality of India. Jawaharlal Nehru and all the leaders of his generation knew this very well. It is generally understood about Nehru that he was a modern-day man who had nothing to do with his country’s civilizational culture or was unaware of it, but the fact is that he was deeply involved with India, and he had a big dream for his country which is equally relevant today.

Launching the book, Javed Akhtar shared his memories about Pandit Nehru and said that he feels lucky that he got the opportunity to take an autograph from Nehru. When I was 14-15 years old, I used to have three heroes – Nehru, Krishan Chander, and Dilip Kumar. In 1963, when his last birthday was celebrated at Teen Murti Bhavan, I had a chance to go there. Javed Akhtar said that even today, many people like and some dislike Nehru. But he is consistently relevant.

While addressing the gathering Author Purushottam Agrawal said, I have been trying to know and understand Pandit Jawaharlal Nehru for the last fifteen to twenty years. This book is the result of that effort and endeavour; it was first published in English. The interest was shown by the acclaimed scholars and readers in the English publication; and request made by many to translate the book in Hindi; and the enthusiasm of Rajkamal Prakashan, brings forth the result ‘Kaun Hain Bharat Mata’.

Professor Aggarwal said that India dreamed by Nehru and the efforts he made to make it possible can be criticized and made some mistakes, but I believe he was right in his concept. Nehru really wanted to create a society of critical thinking. His dream is even more relevant today. Earlier while welcoming and addressing the people at the occasion, Managing Director of Rajkamal Prakashan Samuh Mr. Ashok Maheshwari, said that it has been released at such a time when there is an atmosphere of discussion going on all around in India on country, patriotism, and nationalism. Our time has become an era of post-truth in which the truth is being portrayed as suspicious. Hence, in such times there is a risk where the ideas, values, and ideals are themselves portrayed as suspicious which were given and accepted by our nation builders during the struggle for independence. The danger also exists of making the real heroes invalid by using rumours and sophistry against them and presenting the fake and undeserved people in place of them. In such troubled times ‘Kaun Hain Bharat Mata’ is a serious attempt to understand our history, culture and heritage.

The book signifies and presents the intellectual vision of various freedom fighters and the first Prime Minister of India, Pandit Jawaharlal Nehru in an extremely relevant manner. It consists of excerpts from Nehru’s classic books: his autobiography, Vishwa Itihas Ki Jhalkein, and Bharat Ki Khoj. It also consists of many of Nehru’s essays, speeches, letters, and interviews. The other part of the book consists of various articles on Nehru by Mahatma Gandhi, Bhagat Singh, Sardar Patel, Maulana Azad, Atal Bihari Vajpayee, and various other national and international personalities.

Mr. Purushottam Agrawal has written an excellent preface that tells us about Nehru being an important hardworking and emerging as a giant personality who in his soul had an intuitive understanding of the Indian civilization. It also presents Nehru as having a clear scientific vision. Despite facing the problems of being a politician, his belief in democracy is notable.

At the end of the event, the audience asked questions from Professor Purushottam Aggarwal and Javed Akhtar and they answered those questions.