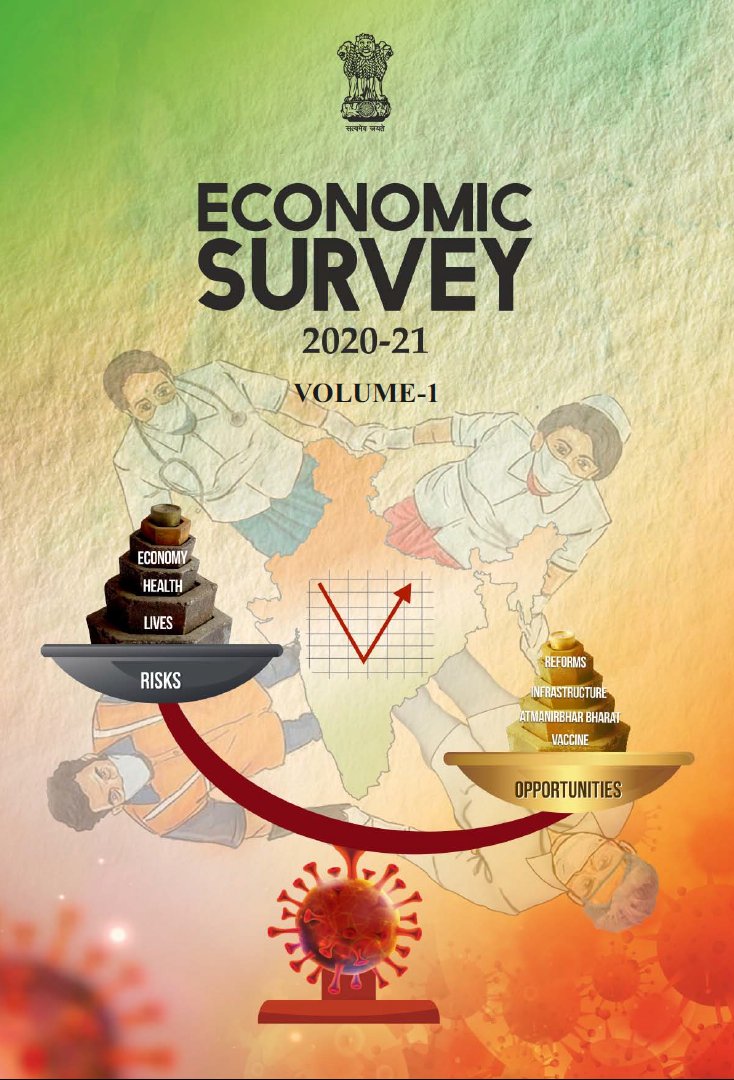 Saving Lives and Livelihoods amidst a Once-in-a-Century Crisis

•           India focused on saving lives and livelihoods by its willingness to take short-term pain for long-term gain, at the onset of the COVID-19 pandemic

•           An early, intense lockdown provided a win-win strategy to save lives, and preserve livelihoods via economic recovery in the medium to long-term

•           Strategy also motivated by the Nobel-Prize winning research by Hansen & Sargent (2001): a policy focused on minimizing losses in a worst-case scenario when uncertainty is very high

•           After the September peak, India has been unique in experiencing declining daily cases despite increasing mobility

•           Upturn in the economy, avoiding a second wave of infections – a sui generis case in strategic policymaking amidst a once-in-a-century pandemic

•           COVID-19 pandemic ensued global economic downturn, the most severe one since the Global Financial Crisis

o Calibrated fiscal and monetary support was provided, cushioning the vulnerable during the lockdown and boosting consumption and investment while unlocking

•           Government consumption and net exports cushioned the growth from diving further down, whereas investment and private consumption pulled it down

o Agriculture set to cushion the shock of the COVID-19 pandemic on the Indian economy in FY21 with a growth of 3.4%

o Industry and services estimated to contract by 9.6% and 8.8% respectively during FY21

•           India remained a preferred investment destination in FY 2020-21 with FDI pouring in amidst global asset shifts towards equities and prospects of quicker recovery in emerging economies:

•           The external sector provided an effective cushion to growth with India recording a Current Account Surplus of 3.1% of GDP in the first half of FY21:

•           Economy’s homecoming to normalcy brought closer by the initiation of a mega vaccination drive:

o Hopes of a robust recovery in services sector, consumption, and investment have been rekindled

Does Growth lead to Debt Sustainability? Yes, But Not Vice- Versa!

•           Growth leads to debt sustainability in the Indian context but not necessarily vice-versa:

o In India, interest rate on debt is less than growth rate – by norm, not by exception

•           Negative IRGD in India – not due to lower interest rates but much higher growth rates – prompts a debate on fiscal policy, especially during growth slowdowns and economic crises

•           Given India’s growth potential, debt sustainability is unlikely to be a problem even in the worst scenarios

•           Active, counter-cyclical fiscal policy – not a call for fiscal irresponsibility, but to break the intellectual anchoring that has created an asymmetric bias against fiscal policy

Does India’s Sovereign Credit Rating Reflect Its Fundamentals? No!

•           The fifth largest economy in the world has never been rated as the lowest rung of the investment grade (BBB-/Baa3) in sovereign credit ratings:

•           India’s sovereign credit ratings do not reflect its fundamentals:

•           Credit ratings map the probability of default and therefore reflect the willingness and ability of borrower to meet its obligations:

Inequality and Growth: Conflict or Convergence?

•           Both inequality and per-capita income (growth) have similar relationships with socio-economic indicators in India, unlike in advanced economies

•           Economic growth has a greater impact on poverty alleviation than inequality

•           Emphasis on NHM in conjunction with Ayushman Bharat should continue

•           Increase in complexity of regulations, intended to reduce discretion, results in even more non-transparent discretion

•           The solution is to simplify regulations and invest in greater supervision which, by definition, implies greater discretion

•           Discretion, however, needs to be balanced with transparency, systems of ex-ante accountability and ex-post resolution mechanisms

•           Forbearance continued long after the economic recovery, resulting in unintended consequences for the economy

•           Banks exploited the forbearance window for window-dressing their books and misallocated credit, thereby damaging the quality of investment in the economy

•           Forbearance represents emergency medicine that should be discontinued at the first opportunity when the economy exhibits recovery, not a staple diet that gets continued for years

•           To promote judgement amidst uncertainty, ex-post inquests must recognize the role of hindsight bias and not equate unfavourable outcomes to bad judgement or  malafide intent

Innovation: Trending Up but Needs Thrust, Especially from the Private Sector

•           India entered the top-50 innovating countries for the first time in 2020 since the inception of the Global Innovation Index in 2007, ranking first in Central and South Asia, and third amongst lower middle-income group economies

•           The business sector’s contribution to GERD, total R&D personnel and researchers is amongst the lowest when compared to top ten economies

•           For achieving higher improvement in innovation output, India must focus on improving its performance on institutions and business sophistication innovation inputs

•           PM-JAY is being used significantly for high frequency, low cost care such as dialysis and continued during the Covid pandemic and the lockdown.

•           Overall, the comparison reflects significant improvements in several health outcomes in states that implemented PM-JAY versus those that did not

o It is highest in States such as Kerala, Punjab, Haryana and Gujarat while lowest in Odisha, Jharkhand, West Bengal and Tripura

o Improvement in each of the five dimensions viz., access to water, housing, sanitation, micro-environment and other facilities

•           Thrust should be given to reduce variation in the access to bare necessities across states, between rural and urban and between income groups

•           The schemes such as Jal Jeevan Mission, SBM-G, PMAY-G, etc. may design appropriate strategy to reduce these gaps

•           A Bare Necessities Index (BNI) based on the large annual household survey data can be constructed using suitable indicators and methodology at district level for all/targeted districts to assess the progress on access to bare necessities.

•           India adopted a calibrated approach best suited for a resilient recovery of its economy from COVID-19 pandemic impact, in contrast with a front-loaded large stimulus package adopted by many countries

•           Expenditure policy in 2020-21 initially aimed at supporting the vulnerable sections but was re-oriented to boost overall demand and capital spending, once the lockdown was unwound

•           Monthly GST collections have crossed the Rs. 1 lakh crore mark consecutively for the last 3 months, reaching its highest levels in December 2020 ever since the introduction of GST

•           Balance on the capital account is buttressed by robust FDI and FPI inflows:

o Net FPI inflows of US$ 28.5 billion during April-December, 2020 as against US$ 12.3 billion in corresponding period of last year

o Petroleum, Oil and Lubricants (POL) exports have contributed negatively to export performance during the period under review

o Imports contracted sharply in Q1 of 2020-21; the pace of contraction eased in subsequent quarters, due to the accelerated positive growth in Gold and Silver imports and narrowing contraction in non-POL, non-Gold & non-Silver imports

•           Trade balance with China and the US improved as imports slowed

•           Resilience of the services sector was primarily driven by software services, which accounted for 49% of total services exports

o Debt service ratio (principal repayment plus interest payment) increased to 9.7% as at end-September 2020, compared to 6.5% as at end-March 2020

•           RBI’s interventions in forex markets ensured financial stability and orderly conditions, controlling the volatility and one-sided appreciation of the Rupee

o Remission of Duties and Taxes on Exported Products (RoDTEP)

•           Systemic liquidity in FY2020-21 has remained in surplus so far. RBI undertook various conventional and unconventional measures like:

o CPI headline and its sub groups witnessed inflation during April-October 2020, driven by substantial increase in price momentum – due to the initial disruptions caused by COVID-19 lockdown

•           Thali cost increased between June 2020 and November 2020, however a sharp fall in the month of December reflecting the fall in the prices of many essential food commodities

•           Food inflation driving overall CPI-C inflation due to the relatively more weight of food items in the index.

•           India has taken several proactive steps to mainstream the SDGs into the policies, schemes and programmes

•           Eight National Missions under National Action Plan on Climate Change (NAPCC) focussed on the objectives of adaptation, mitigation and preparedness on climate risks

•           Despite overall growth in the global bond markets, green bond issuance in the first half of 2020 slowed down from 2019, possibly as a result of the on-going COVID-19 pandemic

•           India’s Agricultural (and Allied Activities) sector has shown its resilience amid the adversities of COVID-19 induced lockdowns with a growth of 3.4% at constant prices during 2020-21 (first advance estimate)

•           An amount of Rs. 18000 crore have been deposited directly in the bank accounts of 9 crore farmer families of the country in December, 2020 in the 7th installment of financial benefit under the PM-KISAN scheme

•           Further improvement and firming up in industrial activities are foreseen with the Government enhancing capital expenditure, the vaccination drive and the resolute push forward on long pending reform measures

•           Government has announced a Production-Linked Incentive (PLI) Scheme in the 10 key sectors under the aegis of AatmaNirbhar Bharat for enhancing India’s manufacturing capabilities and exports:

•           Key indicators such as Services Purchasing Managers’ Index, rail freight traffic, and port traffic, are all displaying a V-shaped recovery after a sharp decline during the lockdown

•           Despite the disruptions being witnessed globally, FDI inflows into India’s services sector grew robustly by 34% Y-o-Y during April-September 2020 to reach US$ 23.6 billion

•           The Indian start-up ecosystem has been progressing well amidst the COVID-19 pandemic, being home to 38 unicorns – adding a record number of 12 start-ups to the unicorn list last year

•           India’s space sector has grown exponentially in the past six decades:

•           The access to data network, electronic devices such as computer, laptop, smart phone etc. gained importance due to online learning and remote working during the pandemic

•           An amount of Rs. 500 each was transferred for three months digitally into bank accounts of the women beneficiaries under PM Jan Dhan Yojana, totalling about Rs. 20.64 crores

Online Schooling has taken off in a big way during COVID-19 pandemic: Economic Survey 2020-21