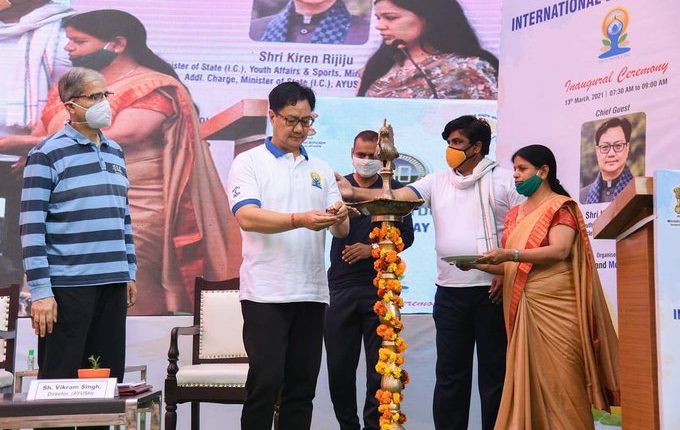 Dr. IV Basavaraddi, Director MDNIY in his introductory remarks welcome the Hon’ble Chief Guest and the other dignitaries. He elaborated about 3 major initiatives of Government of India for the promotion & development of Yoga. United Nation General Assembly declared 21st June as International Day of Yoga, UNESCO recognized Yoga as an intangible cultural heritage of humanity and Yogasana declared as a competitive sport. These initiatives resulted in exponential growth in Yoga promotion since 2014.

Shri PK Pathak, Additional Secretary said that Yoga has played an important role in enhancing the immunity of the human body and hence useful in management of COVID-19. He also said that the ministry of AYUSH in association with the various stakeholders are coming with many activities for the celebration of IDY-2021.

In his inaugural address, the Hon’ble minister said that Yoga is the soft power and has given India a unique recognition before the international fraternity. He also said that Yoga has vast potential of employment opportunity, especially after the declaration of Yogasana as a competitive sport. He appealed to all the young students present during the function and those who are watching online to practice Yoga and take part in Yogasans spot. The minister also added that due to untiring efforts of Hon’ble Prime Minister of India, the acceptability of Yoga has been enhanced to the extent that it has been accepted as a ‘way of life’

The Minister also launched Yoga Re-orientation training programme for Yoga Instructors of Leh-Ladakh undertaken by MDNIY. The Hon’ble Minister appreciated the efforts of MDNIY and said that Yoga will go a long way under flagship of MDNIY.

A brief presentation of Journey of IDY and Yoga Fusion was also made during the programme. A Yoga demonstration by Sh. Bal Mukund Singh, a 69 years old Yoga master was well appreciated.

Sh. Vikram Singh, Director MoAYUSH proposed vote of thanks and narrated the simplicity, popularity of the minster particularly in youth and the Hon’ble minister’s efforts for declaring and Yogasana as a competitive sport. He also thanks and appreciated Shri PK Pathak, Additional Secretary, MoAYUSH for his untiring efforts for improvement in the delivery of work in the Ministry. The efforts done by Team MDNIY under the dynamic leadership of its director were well appreciated.

A Yoga Fusion performance, by a group of students, was also made during the programme. A Yoga demonstration by Sh. Bal Mukund Singh, a 69 years old Yoga master was well appreciated.

The basic motto of the event was to give a wider promotion and publicity to Common Yoga Protocol (CYP) so that maximum people get benefited both at national and International levels. The programme was live streamed through MDNIY’s Social Media Platforms, AYUSH Social Media and My Gov.

Hon’ble Minister thanks the Hon’ble PM Narendra Modi, for making the Yoga a global recognition. The UN Resolution adopted by the General Assembly on 11 December 2014 forms the basis of the observation of IDY, and it emphasises the potential of Yoga to secure health and wellbeing for all.

Giving the details of various programmes of the Ministry, he said the Ministry of AYUSH, being the nodal Ministry for IDY in India, has initiated a host of activities aiming to motivate as many people as possible to participate in IDY activities, through convergence of activities among various stake-holders.

The hon’ble minister stated that the ministry is organising a 3 days Yoga Mahotsav in six cities (eg. Ahmadabad, Itanagar, New Delhi, Bhopal, Panjim and Leh) on 09 – 11 April, 2021. The event will have the participation of various Yoga stakeholders and yoga masters. The preparation is going on with coordination with respective state.

The Ministry has initiated multiple programs and collaborations to build on the progress achieved over the last six years in taking the message of Yoga across India and the world, and to widen its reach further this year. The practice of Yoga has become of utmost importance in the current scenario as the world is on the road to recovery from a deadly pandemic—lending greater focus to public health, preventive medicine, and personal care on both physical and mental fronts.

The Ministry has lined up different IT assets to facilitate the IDY observation. The “Year-long Yoga” calendar which provides information about Yoga programmes across the country. The Namaste Yoga App which is designed as a mobile equivalent of the Yoga Portal will be launched in May 2021.

He further informed that the National Institute of Naturopathy (NIN), Pune has launched a pilot initiative under which over 5,600 ASHA workers in Maharashtra are being provided training on the CYP. NIN will also be organising a countdown event for ASHA workers on the 13th of March 2021.

Giving the importance of Yoga, the minister informed that in coordination with Central Council for Research in Yoga and Naturopathy (CCRYN) the Ministry has initiated work on developing the Productivity Dimension of Yoga. A multi-disciplinary committee of eminent experts headed by Dr. HD Nagendra, Chancellor (S-VYASA), Bengaluru has initiated work on preparing a white paper on the subject.

He said that the Ministry will be inviting nominations for the Prime Minister’s Yoga Awards (PMYAs) for outstanding contribution towards the promotion and development of Yoga on the MyGov platform in April 2021. The awards will comprise of two national-level categories for persons of Indian origin, and two international-level categories for entities of foreign and/or Indian origin.

Further to widen outreach to rural areas and cater to the diversity of India, the Ministry is conducting a comprehensive community radio outreach program with CEMCA, the program will be in regional languages and feature multiple programming on Yoga awareness and training.

The Minister said that Ministry of AYUSH has also been in coordination with other Union Ministries and different State and UT administrations to organise a stream of relevant activities to make this year’s IDY a great success.

He said that The Ministry of AYUSH and Ministry of Youth Affairs and Sports are collaborating on various fronts and will launch a dedicated campaign making Yoga a part of the Fit India movement. This two-month campaign will be launched on 21st April 2021 Additionally, the YCB accredited centres will be made Fit India Centres, and all Sports Authority of India centres will also be made Yoga training centres in association with MDNIY. Yoga shall be a big part of Fit India Movement. He said that the Ministry of Sports is promoting four local sports and now with Yogasana as the fifth sport, will be promoted to a great extent.

Giving the further information, he said that in the private sector also various organisations are working with the Ministry to take the message of Yoga forward. This includes Leading Yoga Institutions, Trade bodies (like CII, FICCI, ASSOCHAM etc), Yoga and Naturopathy colleges and other stake-holders.

He informed that Shri Ram Chandra Mission, Hyderabad is organising IDY related activities with the support of the Ministry of AYUSH and in collaboration with Patanjali Yogpeeth- Haridwar, SVYASA – Bengaluru, and other leading institutions. This will be a 100-day event titled “Yoga for Unity and Wellbeing” The programme is supported by the United Nations Department of Public Information (UNDPI) and will cover many countries apart from the length and breadth of India. All the major leading Yoga institutions are collaborating this event on 14.3.2021