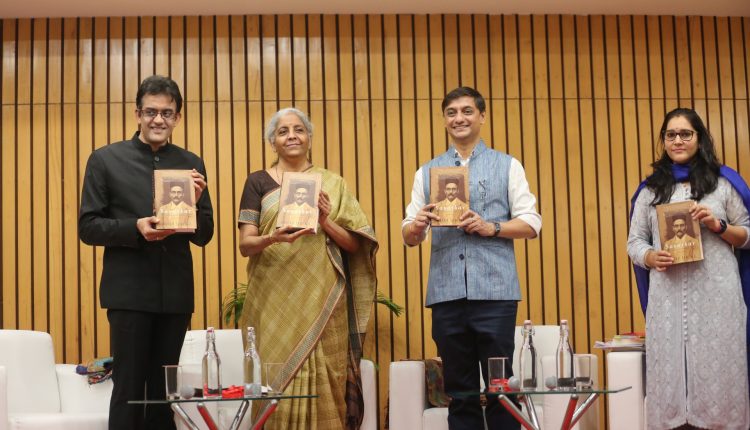 · We cannot afford to miss that distinct strand which also contributes to Indian history -Hon'ble Minister of Finance, Smt Nirmala Sitharaman · Hindu Mahasabha was rooting for a secular Hindu Rashtra -Vikram Sampath · Vikram Sampath next biographies to be on Chatrapati Shivaji and Tipu Sultan · Prabha Khaitan Foundation organized the launch of the book Savarkar - A Contested Legacy 1924-1966 – by Vikram Sampath published by Penguin Random House

New Delhi : Kitaab’, an initiative of Prabha Khaitan Foundation, organized the launch of the book Savarkar – A Contested Legacy 1924-1966 – by Vikram Sampath and published by Penguin Random House. Held at India International Centre, the event was attended as a Chief Guest by Smt Nirmala Sitharaman, Hon’ble Minister of Finance, Govt of India. Indian Economist Sanjeev Sanyal was the Panelist, and Shubhrastha was the moderator.

The idea behind the initiative of ‘Kitaab’ is that the birth of a book always calls for a celebration! Kitaab provides a platform for authors to display and showcase their newest literary works before a discerning audience and the media through tastefully curated book launches.

This is the second part of the two series book. The first book Savarkar: Echoes from a Forgotten Past, 1883–1924 talked about his childhood influences, political activism, Kalapani imprisonment, and eventual release in 1924.

Decades after his death, Vinayak Damodar Savarkar continues to uniquely influence India’s political scenario. An optimistic advocate of Hindu-Muslim unity in his treatise on the 1857 War of Independence, what was it that transformed him into a proponent of ‘Hindutva’? A former president of the All-India Hindu Mahasabha, Savarkar was a severe critic of the Congress’s appeasement politics. After Gandhi’s murder, Savarkar was charged as a co-conspirator in the assassination. While he was acquitted by the court, Savarkar is still alleged to have played a role in Gandhi’s assassination, a topic that is often discussed and debated.

Shazia Ilmi as member of Ehsaas Woman of Delhi welcomed the panellist and after the felicitation, the book was unveiled in front of an esteemed audience following the Covid protocol. The Hindi version of volume one was also unveiled.

Speaking at the event Hon’ble Minister of Finance, Smt Nirmala Sitharaman said, “It is essential to have organizations like Prabha Khaitan Foundation. To have platforms like Prabha Khaitan Foundation you have an opportunity to say things first in a select company and probably even go back to exchange a thought here and there with people who have attended the program along with you”.

Speaking on Veer Savarkar she said, “Veer Savarkar is one such personality in the Indian history about whom so much is discussed and talked, and I wouldn’t mind one day stopping each one of them and ask, what is the foundation or basis on which you are giving your view, opinion and subject of interpretations.”

She further added, “I am so pleased to know that Veer Savarkar attracts so many conversations. I fully want the conversations to keep going on. But, informed conversations most of the time are missing; and that opinionated conversation is also not based on this fact or any other fact. and as a result, it becomes based on emotions based on likes and dislikes. But we are in the process doing a big disservice to the nation, because leaders like Veer Savarkar stood their ground, and as a result their contribution is distinct. We cannot afford to miss that distinct strand which also contributes to Indian history. It may sometimes align with some political ideologies, some other times it may not align with some political ideologies. It may even sound like it is aligning with an opposite ideology. That is where we need solid, well-researched, fact-based biographies or books on such leaders.”

Crediting Vikram Sampath, Hon’ble Minister of Finance, Smt Nirmala Sitharaman she said, “I would like to give credit to Vikram Sampath for the extensive research, for having taken this subject, having continued the research, and also sticking with the subject in spite of all the odds. Indian research particularly pertaining to the Indian freedom movement, about our cultural social oneness we need many more Vikram Sampath’s’ and even more such endeavors from Vikram Sampath himself.”

Neelima Dalmia Adhar,Ehsaas Woman of Delhi – Prabha Khaitan Foundation, said “Our initiative Kitaab is one that provides a significant platform for authors to showcase their books. We are delighted to host the launch of Vikram Sampat’s new book “Savarkar – the Contested Legacy” in Delhi, in these challenging times, post COVID. We are grateful to the Hon’ble Finance Minister Smt Nirmala Sitharaman for being present at the launch. Vikram Sampat who has authored many brilliant historical and biographical books promises us a journey into the life of Savarkar in his well-researched biography and I wish him all the success in this new venture”.

Shubhrastha moderated an engaging panel with Indian economist Sanjeev Sanyal and Vikram Sampath which explored the life’s and times of Veer Savarkar.

Author Vikram Sampath on the launch said “This is a culmination of about 5 years of strenuous research and work across archives and libraries both in India and abroad to bring together a holistic picture of a much maligned and misunderstood man. I hope the discerning readers are able to read these volumes with an open mind and make up their informed opinions on Savarkar, his legacy and his importance in today’s India.”.

Indian Economist Sanjeev Sanyal said, “It is an excellent work, very well written and extremely readable. I have read the first volume, and halfway through the second volume and really enjoying it. and I would go as far as to say that these two volumes may be the best biography ever written by an Indian author.”

Speaking on a question asked about Savarkar’s view on Muslims and Christians, Vikram said, “I think the problem is, I would blame the proponents as much as the opponents of Savarkar. I mean from the opponents you can’t expect any better but even those who claim to be proponents, I think there’s so little study that is done to even understand what the man said or stood for. No one would know his views on Christians and Muslims of India, even his proponents won’t know, because they wouldn’t have read him in the original. I was quite amazed to actually discover in the course of the research a document called the Constitution of free Hindustan State, which the Hindu Mahasabha had drafted insert in 1945 five years before the actual constitution of India was drafted and in that the most ultra-right-wing party of India the Hindu Mahasabha was rooting for a secular India.

He further elaborated that the Hindu Mahasabha was rooting for a secular Hindu Rashtra, Hindu Rashtra is one where as he mentioned earlier in the session that the majority is not going to get any extra concessions, and the minorities are not going to get any privileges. There should not even be a ghost of suspicion in the minds of the minorities of this country that in the conceived Hindu Rashtra of India their legitimate political cultural linguistic rights would be infringed upon and if at all there is an attempt the state would intervene to remove those infringements.

Vikarm further announced that he will be working on two other biographies: one on Chatrapati Shivaji and one on Tipu Sultan – both of whom belonging to the 16th -17th century are very relevant in contemporary study and politics.

In this concluding volume of the Savarkar series, exploring a vast range of original archival documents from across India and outside it, in English and several Indian languages, historian Vikram Sampath brings to light the life and works of Vinayak Damodar Savarkar, one of the most contentious political thinkers and leaders of the twentieth century.

Prabha Khaitan Foundation (PKF) is a non-profit trust founded by the Late Dr. Prabha Khaitan in the early 1980s. It is dedicated to socio-cultural welfare and humanitarian causes.

Based in Kolkata, The Foundation is dedicated to promoting performing arts, culture, education, literature, gender equality and women’s empowerment. It collaborates with caregivers, committed individuals and like-minded institutions to implement cultural, educational, literary and social welfare projects in India.

Combo therapy cuts risk of heart attacks and strokes in half