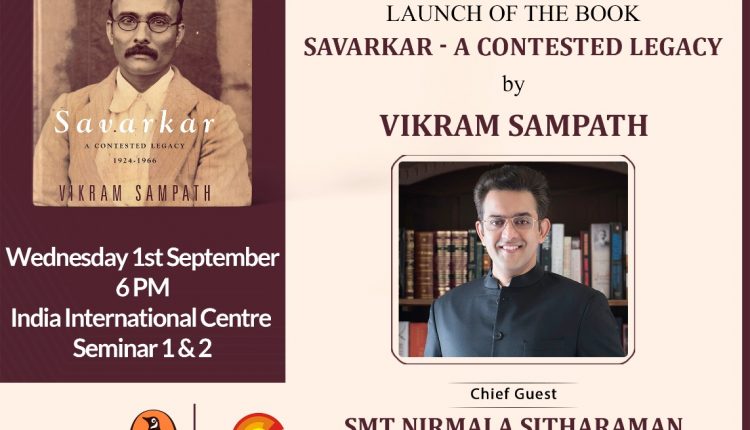 New Delhi: ‘Kitaab’ an initiative of Prabha Khaitan Foundation to launch of the book Savarkar – A Contested Legacy 1924-1966 – by Vikram Sampath, . Smt Nirmala Sitharaman, Hon’ble Minister of Finance, Govt of India, will be the Chief Guest. Indian Economist Sanjeev Sanyal will be the Panelist, and Shubhrastha as moderator.

Prabha Khaitan Foundation (PKF) is dedicated to socio-cultural welfare and humanitarian causes. It is a non-profit trust founded by the Late Dr. Prabha Khaitan in the early 1980s.

Based in Kolkata, The Foundation is dedicated to promoting performing arts, culture, education, literature, gender equality and women’s empowerment. It collaborates with caregivers, committed individuals and like-minded institutions to implement cultural, educational, literary and social welfare projects in India.

किताब Books, a Prabha Khaitan Foundation initiative – The birth of a book always calls for a celebration! Kitaab provides a platform to authors to display and showcase their newest literary works before a discerning audience and the media through tastefully curated book launches.

About the book – Decades after his death, Vinayak Damodar Savarkar continues to uniquely influence India’s political scenario. An optimistic advocate of Hindu-Muslim unity in his treatise on the 1857 War of Independence, what was it that transformed him into a proponent of ‘Hindutva’? A former president of the All-India Hindu Mahasabha, Savarkar was a severe critic of the Congress’s appeasement politics. After Gandhi’s murder, Savarkar was charged as a co-conspirator in the assassination. While he was acquitted by the court, Savarkar is still alleged to have played a role in Gandhi’s assassination, a topic that is often discussed and debated.

About the Author – Vikram sampath, Bangalore-based historian, is the author of four acclaimed books, Splendours of Royal Mysore: the Untold Story of The Wodeyars, My Name Is Gauhar Jaan: The Life and Times of a Musician and Voice of the Veena, S. Balachander: A Biography and Savarkar: Echoes From A Forgotten Past, 1883-1924. He was awarded the Sahitya Akademi’s first Yuva Puraskar in English literature and the ARSC International Award for Excellence in Historical Research in New York for his book on Gauhar Jaan. The book has also been adapted as a play, ‘Gauhar’, by Lillete Dubey and is being adapted to a Hindi movie by Ashutosh Gowariker.

Vikram has a doctorate in history and music from the University of Queensland, Australia, and is a former senior fellow at the Nehru Memorial Museum and Library, New Delhi. An engineer/mathematician from BITS-Pilani and an MBA in finance from S.P. Jain Institute of Management, Mumbai, he is also a trained Carnatic vocalist. He has established the Archive of Indian Music, India’s first digital sound archive for vintage recordings, and is the founder-director of the Bangalore Literature Festival, Indic Thoughts Festival and the ZEE Group’s ARTH: A Culture Fest.Vikram’s Savarkar: Echoes from a Forgotten Past, 1883-1924 (Penguin 2019) was a national bestseller