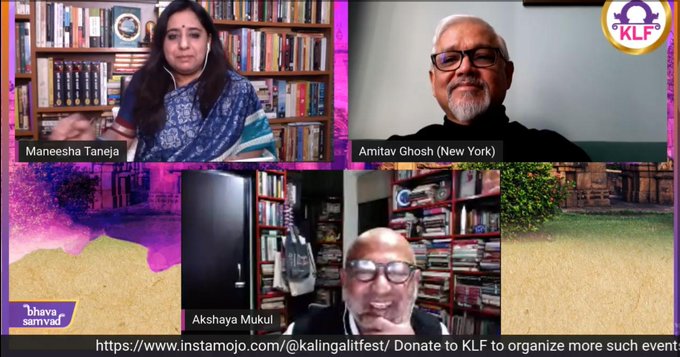 He believes that it is very difficult to judge the quality of novel in other languages. “Whole girmitiya culture is a very musically based culture. Man doesn’t make history. It’s the earth that makes history. In the European way of thinking history, it was very anthropocentric. I have got no doubt that the Indian novels celebrated everywhere will be the ones written in regional languages. Even when they commissioned the translation, they were unable to get it to the market.

“Poetry has been more responsive towards environmental challenges. Pandemic is a very difficult situation for writing fiction,” he says.

While mentioning his upcoming work, he says, “I can call the new book a work of translation, but it’s a work of adaptation. There’s a very famous legend about the Sundarban, the Bon bibi. Bon bibi is the lady of the forest in Sundarban. The legend of Bon bibi is vital to life in Sundarban. It’s a very ecological and environmental legend. It’s all about how to reach a balance between the needs of humans and the needs of other beings. The other beings being animals of every kind and the forest it serves.It really brings the forest alive.

When I wrote my book the Great Derangement, one of the things I point out is that in many ways poetry has been more environmental responsive than the prose has. Similarly, I feel more important now that the most important think we can do right now is to try and give voice to non-human beings. Historically, India we’ve had so many forms of literate practice that give voice to the non human through mediating through figures. Monosha debi is one such figure. Monosha debi features a lot in Gun Island. She is an autochthonous figure. She’s not from the Brahminical Pantheim, but Shes a folk deity across Eastern India. Monosha cult is a very ancient cult. It’s always been about a figure who speaks for animals and other beings. That’s one of the things that interested me so much in The Gun Island. Monosha debis legend is really about her antagonistic relationship with Chand Shodagaur. Chand Shodagaur represents the profit motive and Monosha debi represents other beings.”