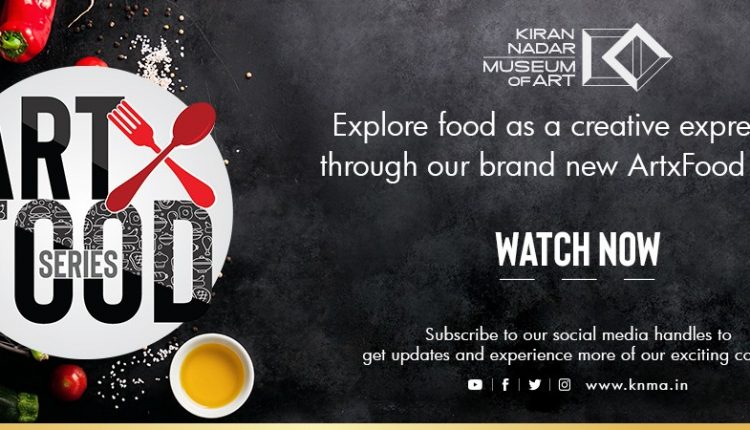 New Delhi: Kiran Nadar Museum of Art continues its quest to explore the innumerable intersections of art and the world around us with the debut of its latest series Art X Food, which premiered on March 28, 2021. This series attempts to delve into one of the most important aspects of life, food. Often considered one of the essential building blocks of life, there are many ways in which this converges with art around us.

KNMA connects with various individuals in the food industry including Eeshan Kashyap, Food and Beverage curator; Anumitra Ghosh Dastidar and Shalini Krishan of Edible Archives; artist Sreejata Roy of Museum of Food; Malini Banerjee former fashion director at Elle and Manish Mehrotra of Indian Accent, to name a few. Through this series, commences an exploration and an attempt to initiate discussions that survey the concept of food as a social sculpture. It is an effort to initiate a conversation and understand the act of human interaction, where eating together, can be conceived as an art form in itself.

Premiering across KNMA social media platforms, this series will explore the integral role that food has played in art. Be it a stone age cave painters who used vegetable juice in their paints; the Egyptians who carved pictographs of crops and bread on hieroglyphic tablets; Cezanne, Picasso and Dali who painted still life paintings of fruits, vegetables and food; or pop artist Andy Warhol’s Campbell soup cans and Coca Cola bottles. More recently, contemporary artists have used food to make statements: political (especially feminism, which is well represented in artwork such as The Dinner Party), economic, and social. Restaurants have been opened as art projects, performances have been conducted which involved food preparation, elaborate sculptures have been crafted from edible materials like chocolate and cheese.

As the world faced lockdown last year, food continued to hold a pivotal role in the narrative. Be it baking of bread or the act of cooking of food, which symbolized a collective expression of community. Much like art brings people together, food does as well. It is a reflection of our lifestyle, culture, preferences, and beliefs. The food we consume incorporates art because of the cultural connection that is generated with what we eat.

Following in the footsteps of the well-received and highly successful ‘Art x Fashion’, ‘Art x Design’ and ‘Art X Street’ series that debuted before, this series aims to give audiences an insight into a new concept of art and societal interactions within this realm.

IIT Delhi Reduces its Carbon Footprint by More than 50%