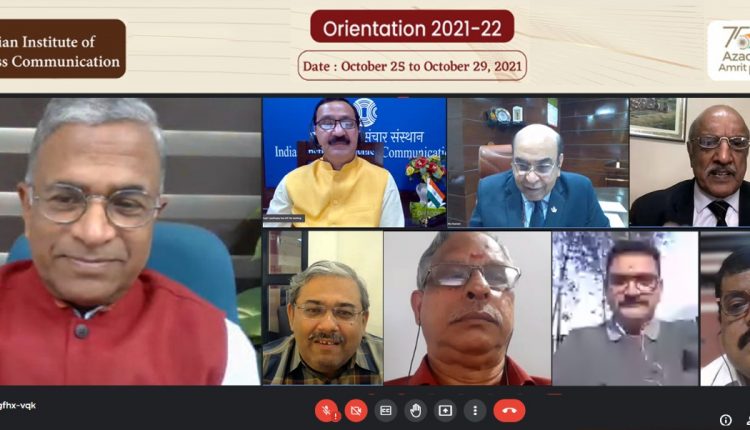 ‘Knowledge Based Economy’ will play an important role in ‘Knowledge Era’: Harivansh

New Delhi : Addressing the opening session of the Orientation Programme at the Indian Institute of Mass Communication (IIMC) o n Thursday, Deputy Chairman of Rajya Sabha Shri Harivansh Narayan Singh said that ‘Knowledge Based Economy’ plays an important role in ‘Knowledge Era’. In the 21st century, India will be the center of a knowledge-based economy. He said that a digitally empowered society is very important for this economy. On this occasion, Prof. Sanjay Dwivedi, Director General of IIMC, Mr. Ashish Goel, Additional Director General, Program Coordinator and Dean (Academic) Prof. Govind Singh, faculty members and students of all the centers of IIMC were present.

While addressing the students on the topic ‘Media and Public Concern’, Shri Harivansh Narayan Singh said that a journalist should have knowledge of every subject related to the society. Artificial Intelligence has brought a big change in the world of journalism. He said that the beauty of words, the breadth of ideas, the seriousness of journalism and the dignity of expression are visible in the pages of newspapers. In this age of technology, new mediums of media will come, but the dignity of the written words will always remain intact.

While advising the students of the media, the Deputy Chairman of Rajya Sabha said that if your skills are not good, then you cannot do better journalism. So you should learn something new every day and use it for the benefit of the society. He said that the reader is your consumer. Along with information and entertainment, it is also the duty of journalists to educate the public.

According to Shri Harivansh, the dignity of the language and the truthfulness of the facts are very important for the media. Journalists should have no difficulty in stating facts publicly. We are harming the credibility of journalism by giving false or wrong news in the news race. If the credibility of journalism is maintained, then it will be easier for journalists to work on issues of public concern.

On this occasion, the Director General of IIMC, Prof. Sanjay Dwivedi said that the soul of journalism dies when human consciousness ends. That’s why human sensibility should be there in every journalist. It is this human compassion that saves us from walking on the wrong path. Journalism is a big base of faith of the Indian public. The public has faith in the journalism of India. If this belief is to be saved, then we have to live up to the concerns of the people.

China and Pakistan are the main challenge: Lt Gen Hasnain

Expressing his views on the topic ‘Challenges to National Security’ in the second session of the program, Lt. Gen. (Retd.) Syed Ata Hasnain, Chancellor of Central University of Kashmir said that every country has a vision for its citizens. China and Pakistan are the main challenges before us in India’s security scenario. Hasnain said that the army is protecting the border, but internal security is also necessary. In the coming times, there will be a trend of cyber attack, not war. Pakistan is confident that India is so focused on economic growth and development that it will not risk war. He said that India and the world need to think more about terrorism.

‘Biological warfare’ broke out due to Corona: Major General Katoch

Taking forward the issue of national security, Major General (Retd.) Dhruv Katoch said that due to Corona, a situation of ‘biological warfare’ has arisen all over the world. India has also succeeded in dealing with it on the basis of knowledge and research. He said that ‘Hybrid Warfare’ is a new age way of fighting with the enemy. In this war there is a game of data and after analyzing that data, moves are made against the enemy. With the help of this data, you can give rise to a situation of violence and tension by spreading misinformation in the enemy country. Our neighboring countries are doing the same thing nowadays, but India has given a befitting reply to it with the right use of information.

‘Regional journalism is the future of India’

In the last session of the day, eminent journalists of the country addressed the students on the topic ‘Future of Indian Language Press’. Mr Parag Karandikar, Editor of Maharashtra Times said that now youth prefer to read ‘Notification News’. They form their opinion only from the news that comes in a line of notification. According to Mr. Rajesh Raina, Editor, News18 Urdu, Regional journalism is the future of India. Today digital channels are becoming ‘hyper local’ and TV channels are starting their own regional channels. He said that if you are not an all-rounder in the media field, then your field of work will be very limited. Mr. Susanta Mohanty, editor of Odia newspaper ‘The samaja’, said that the circulation of regional language newspapers has decreased during COVID, but the readership of these newspapers on digital platforms has increased. Speaking on the occasion, Mr. KNR Namboodiri, Editor of Malayalam newspaper ‘Janmabhoomi’ said that digital media has given a new direction to regional journalism.

India Education Diary Bureau Admin Nov 28, 2021
JAMMU : In its efforts to enrich the Stakeholders associated with Hotel Industry, the Directorate of…