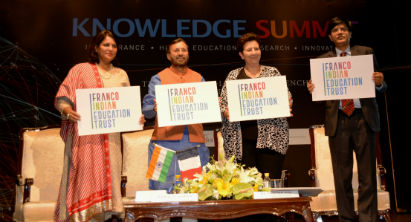 New Delhi: Coinciding with the first state visit of French President Emmanuel Macron to India, the Knowledge Summit brought together education and research industry experts on March 10-11, 2018 in New Delhi in the presence of Mrs. Frédérique Vidal, Minister of Higher Education and Research and Innovation, Republic of France and Mr. Prakash Javadekar, honorable Minister of Human Resource Development, Government of India. The Summit marks the culmination of the four month Bonjour India programme. Among its highlights, the Future Tour organised meetings between enterprises, experts, students and academics from both countries, laying the ground for Indo-French collaboration for the coming decade.

Jointly organised by the French Institute in India, along with the Ministry of Higher Education, Research & Innovation (MESRI), Republic of France and the Ministry of Human Resource Development (MHRD), Government of India, the Knowledge Summit was the first high-level Indo-French summit on higher education and research. More than 350 people from nearly 80 Indian institutions and 70 French institutions participated with key enterprises in the Summit which received the support of the Ministry of Science and Technology, Campus France, and Confederation of Indian Industry.

A record number of MoUs (around 15) were unveiled between universities and research institutions on joint initiatives and partnerships during the summit. Most significantly, one MoU signed between France and India on March 10 now mutually recognizes educational qualifications between both countries. Students graduating from Indian institutions will thus be eligible for further education in France, and vice versa.

Additionally, a Franco-Indian Trust will offer even more scholarships and merit-based financial support provided to Indian students who wish to study in France.

The Knowledge Summit is an essential step toward the goal set by the French Government to attract 10,000 students to France by 2020. Last year, over 5,000 Indian students chose France as a study destination, showing a 60% increase from the previous year. The Summit explored seven priority sectors for collaboration: space and aeronautics, mathematics and information technology, agronomy and food processing, eco-energy, natural resources and bioactive compounds, architecture and urban planning, urban mobility.

Business schools and engineering schools are particularly active in their cooperation. There are already more than 550 partnership agreements (MoUs, Memorandums of Understanding) currently recognised by the university cooperation service. This concerns about 120 French institutions and 150 Indian institutions. A dozen institutions have also decided to set up a permanent office in India, such as Science Po or ESC Rennes.

The Franco-Indian Education Trust is a joint initiative by the French Embassy in India and Mr. Prshant K Lahoti, Managing Trustee of Krishnakriti Foundation and co-founder of Kalakriti India. It aims to increase student and expert mobility between India and France. Established on 31 August 2017, the Franco-Indian Trust was unveiled during the Knowledge Summit. The establishment of this Trust is a step towards France’s commitment to significantly increase the number of Indian students studying in France, from 5,000 today to 10,000 in 2020. Through student scholarships, supporting exchange of professors and researchers, and a special Young Leaders programme, the Trust will create ambassadors that strengthen ties between both countries.

The Agreement between the Government of the Republic of India and the Government of the French Republic to Facilitate Mutual Recognition of Academic Qualifications. 25 years in the making, this agreement marks a breakthrough providing students across-the-board recognition to degrees acquired in India. It drives mobility of students by mutually recognising academic qualifications at various levels: starting with secondary school, Licence, Master, to Doctorate degrees, and also recognises periods of study in the partner country.

The 15 MoUs between French and Indian Higher Education Institutions. The agreements signed during the Knowledge Summit promote exchange of students and scholars between prestigious universities and institutes and facilitate shared research programmes. Some, such as the one between Institut Mines-Télécom Paris and IIT Indore, are broad agreements promoting this exchange at every level. Among the most significant, an agreement will set up a first-of-its-kind network of Institute of excellency between 4 ENS in France and 7 IISER in India. Others are very specific, such as the one between INSERM, Université Paris Diderot and Institute of Liver and Bilary Science, setting up a common research programme on liver diseases.