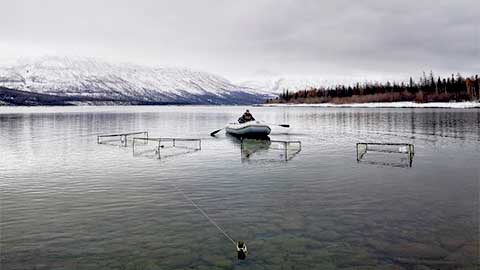 In September 2020, scientists from Siberian Federal University participated in an unusual expedition to Sobachye Lake (Taimyr Peninsula) to study the life of the Boganida char, a genus of salmonid fish. Now char lives exclusively in natural reservoirs, however, due to its high nutritional value, researchers are sure of the need to transfer this fish to aquaculture in order to make its meat an affordable food product for the mass consumer.

Back in 2018 already, scientists from Siberian Federal University and the Institute of Biophysics of the Federal Research Center of the KRC SB RAS proved that char is the most useful fish in the world. Its secret lies in the high content of long-chain omega-3 polyunsaturated fatty acids, which are responsible for the well-being of the human cardiovascular and nervous system, youth and beauty of the skin, prevention of degenerative changes in the brain and prevention of obesity. Only 35 grams of char fillet is enough to suffice the daily need for omega-3, which is incomparable to tilapia, which is more usual for the townspeople, but to get the same amount of omega-3, one will have to eat at least 12 kilograms of it.

“Our task was to study the biochemical and genetic characteristics of char, which lives in Sobachye Lake on Taimyr, to study its diet, and also to take biomaterial from males and females to conduct experiments on breeding char in aquaculture. This fish is rare. If we catch it in the northern lakes, we will destroy the entire population very quickly. An alternative solution is to find out what exactly makes the char so unique and to try to reproduce as much as possible the necessary conditions in which the fish will spawn well, and at the same time will preserve the maximum of their beneficial properties,” explained Anastasia Rudchenko, Assistant Professor of the Department of Aquatic and Terrestrial Ecosystems of Siberian Federal University.

For the experiment, the researchers caught two dozen chars and used sparing intravitam methods for the selection of spawn – all manipulations over the fish were performed under anaesthesia, after which the char, which served as donors, were released back into the lake.

“The eggs were then fertilized in artificial conditions and delivered to the Norilsk fish hatchery – there, after the end of the incubation, that is, at the beginning of spring, the future generation of chars will grow and participate in subsequent experiments,” the scientist noted.

The main challenge is that the “cultured” char needs to retain a high content of polyunsaturated fatty acids. To do this, we need to find out what exceedingly affects the ability to store them in the fish’s body. Perhaps the matter is in the food that the char, leading a predatory lifestyle, finds in the Taimyr lakes – small fish it hunts eat special algae rich in nutrients. Or maybe the genetic apparatus of char has evolved so that this fish can synthesize long-chain omega-3 fatty acids on their own.

“One of the fundamental tasks for the future is to develop a complete feed for the char that will live in a fishfarm. The scholars just began to study the question of the genetically determined ability to synthesize omega-3 acids in these fish. Today it is only clear that freshwater fish accumulate polyunsaturated fatty acids better than their marine relatives. Our team includes genetics, hydrobiologists, ichthyologists, and fish breeders — it is important to approach the breeding of char in a comprehensive manner,” concluded Anastasia Rudchenko.

On average, mature specimens of char in Sobachye Lake reaches a weight of 5 kilograms — 3 of them are fillets. However, if it is possible to domesticate the char, it will be too costly to wait till it reaches its peak shape. Most likely, smaller fish weighing 2–3 kilograms will come onto market shelves.

“The fast-growing commercial fish such as carp and trout, is the easiest to breed in aquaculture. The method of breeding them has long been perfected. The char living in Taimyr is still poorly studied, but we hope that our expeditions and comprehensive research of this species will bring good results. Over time, it would be nice to include char dishes in the weekly menu of Russians in order to prevent cardiovascular diseases, which claim thousands of lives annually,” said the scientists of Siberian Federal University.

The expedition was led by Larisa Glushchenko, assistant professor of the Department of Aquatic and Terrestrial Ecosystems of Siberian Federal University. In addition to the scientists and students of Siberian Federal University, the study involved employees of the Yenisei branch of the Glavrybvod Federal State Institution and the Institute of Biophysics of the Federal Research Centre of the KRC SB RAS.

The work was performed under the supervision of Mikhail Gladyshev, head of the Department of Aquatic and Terrestrial Ecosystems, Corresponding Member of the Russian Academy of Sciences, with financial support from the Environmental Foundation of Siberian Federal University and the Project Office for the Development of the Arctic.

SibFU discusses the features of ethnic migration processes in Siberia

Folk Art Is the Soul, Strength, and Pride of a Nation: Palette of Languages and Cultures at ETU “LETI”