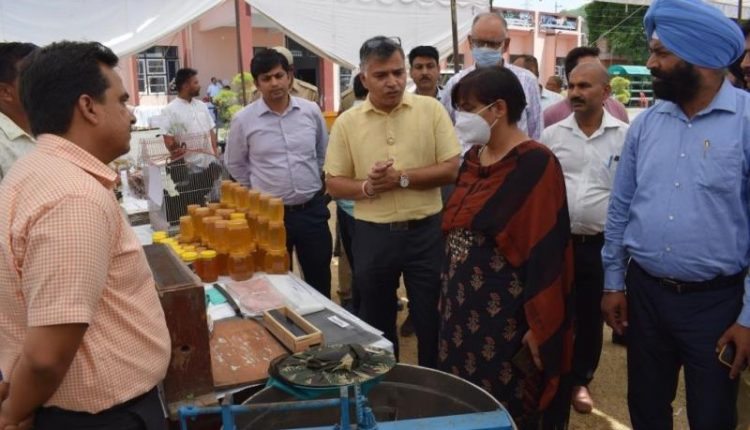 The Chief Guest of the programme, Anuradha Gupta, Deputy Commissioner, Samba discussed in detail the importance of agriculture in preview of district Samba.

She enlisted various initiatives taken by the government for the welfare of the farming community and said that GOI is making efforts to increase productivity through infusion of traditional knowledge, modern science and technology, providing improved marketing facilities and resolving several other issues like power, irrigation, cheaper credit and rural infrastructure.

“A renewed thrust is being given to organic farming to bring about a paradigm shift in agrarian policy, rural prosperity and improving the incomes and the quality of life of the farmers,” added the Deputy Commissioner.

Dr. Jyoti Kachroo, Director Planning & Monitoring, SKUAST-Jammu and the Guest of Honor appraised the farmers about the various startups developed under guidance of SKUAST-J under RKVY RAFTAR project of MoA & FW, GoI. She said Agri-Business Incubator, SKUAST-J, a unit of Division of Agril. Economics & ABM along-with offers various entrepreneurship opportunities to the farmers of the region to increase their income and start their own agri-business ventures.

Dr. Pardeep Kumar Walli, Director Research and guest of honor, highlighted the role of quality seed in increasing productivity and production of field crops at KVK Samba and its role in development of sustainable agriculture. He also stressed upon the initiative of participatory seed production programme of SKUAST-Jammu. He also highlighted the newly released basmati varieties in increasing the farmers’s income.

He stressed upon the main focus of initiating this programme through KVKs in the country to introduce natural farming to increase the income of the farming community. He discussed the activities undertaken by KVK Samba for the upliftment of farmers in Samba district and multi-dimensional role of farmers for maintaining sustainability and prosperity in agriculture. A broad exhibition on the different aspects of farming was organized for the awareness of the farming community. Further, a number of progressive farmers and agri-entrepreneurs/startups of the district were felicitated by the worthy Deputy Commissioner, Samba. All line departments have also put up their stalls in the Kisan mela.