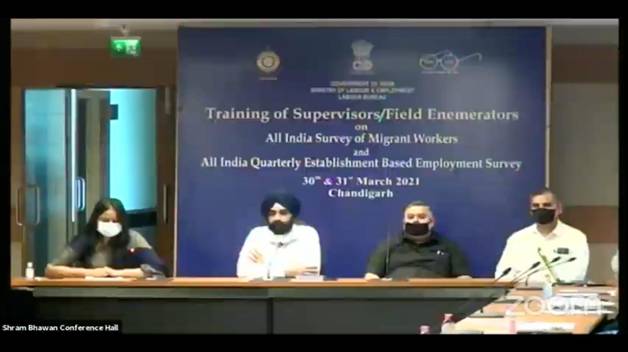 The five surveys have been worked upon simultaneously and will be launched in a phased manner keeping in mind the constraints arising from pandemic. The first surveys to be launched are the All-India Survey of Migrant Workers and All-India Quarterly Establishment based Employment Survey (AQEES). These surveys will be path breaking in their “Paperless” data collection approach due to use of tablet PCs in the field work, these tablets are equipped with latest software application. Use of latest technology is likely to reduce the survey completion time by at least 30 – 40%. The Labour Bureau is being aided by BECIL, a Government of India Enterprise under the Ministry of Information and Broadcasting to provide the IT support. In another first these surveys will be conducted in major regional languages.

A closer look at each of the survey objectives are:

All-India Survey of Migrant Workers – To study the kind of employment related migration undertaken by workers, the details of working and living conditions faced by them and impact of COVID 19 on their world of work.

Prime Minister Narendra Modi will participate in the meeting…

BatX Energies and TransCreation Lift the Winners Trophy at…

These surveys will plug-in the data gap on various aspects of labour and employment as acknowledged by the Hon’ble Minister of Labour and Employment, Shri Santosh Kumar Gangwar. These surveys will aide evidence-based policy making processes.

Shri DPS Negi, Director General, Labour Bureau stated that under the able guidance of the expert group and with full support from the Ministry, the Bureau could adhere to the timeline of launch and today launched two of the five All India Surveys one on Migrant workers and other the AQEES. While lauding the efforts of Expert Group and the Bureau officials, he also informed that Bureau is leaving no stone unturned to ensure successful completion of the field work of these surveys. Since last few months, the Bureau has been imparting regular intensive trainings to the field investigators and supervisors under these surveys to ensure quality results.

Admissions for the New 2021 Class are Now Open for Ramaiah Group of Institutions’ and St. George’s University’s Pathway to a Doctor of Medicine MD

Aakash Educational Services Limited (AESL) to take care of complete vaccination cost for Covid-19 for all its 5,000 + employees with one dependent pan-India

SP Jain Global Rated No. 1 among all Higher Education Providers in Australia for…